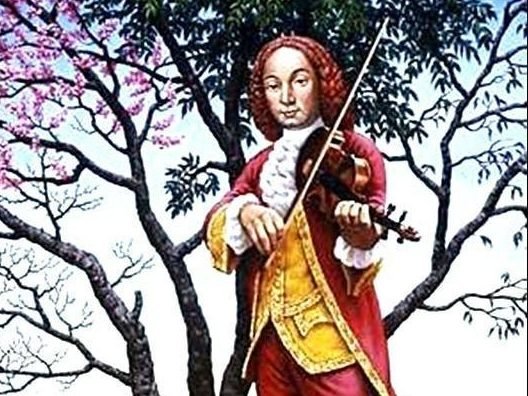 Antonio Vivaldi, the “Red Priest” (he was ordained and had a full head of bright red hair), known as an opera composer in his day, and the composer who developed the concerto grosso (the Baroque musical form where a small ensemble plays with and against a large ensemble). He was a significant influence on JS Bach, who transcribed six of Vivaldi’s concertos for various instruments for solo keyboard –that’s a lot of work by quill and ink by candlelight.

Vivaldi is best known, of course, for his Four Seasons, four violin concertos that describe the seasons of the year. The descriptive nature of the music was foreshadowing the romantic era, when music depicted nature, along with personal feelings. During Vivaldi’s time this was considered revolutionary. Speculation says he was likely depicting the countryside of Mantua. One can imagine the visuals as he depicts the sounds of barking dogs, buzzing mosquitoes, a crying shepherd, storms, drunken dancers, hunting parties from the hunters’ and prey’s point of view, frozen landscapes, ice skating children, and warm winter fires.

Vivaldi was very much a “composer for hire” and churned out works at an amazingly fast rate, and enjoyed commissions from the nobility and royalty in Europe. Towards the end of his life, his music fell out of favour and he suffered financial strains, like many composers. He died aged 63 and was buried in a pauper’s grave.

Because the Four Seasons is so well known, here’s something a little different – the Spring movement on acoustic guitar, arranged and performed by Emre Sbuncuoglu.