Mussorgsky was on a mission: to promote Russian music to the western world 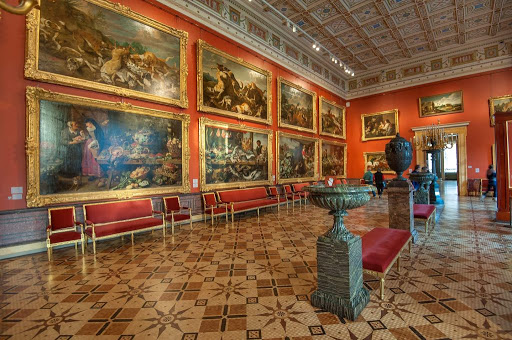 A scene from the Hermitage Museum in Russia

Tomorrow is Modest Mussorgky’s birthday. He, along with Rimski-Korsakov, was a Russian composer on a mission: to compose music with a distinct Russian sound, and to achieve this, often defied what was considered “acceptable” during the Romantic era. Like Bela Bartok a few decades later, Mussorgsky used rustic folk themes as a basis on which to write his music. While Bartok travelled and gathered music across Europe, Mussorgsky was firmly Russian in his mission. He didn’t have a lot of theoretical education, but he he analyzed Beethoven symphonies, and fellow composer Balakirev explained to Mussorgsky the forms used in classical compositions . It was important for Mussorgsky to learn these forms from which to deviate, much like a great abstract artist does after mastering representational art.

Mussorgsky’s best-known works are repertoire staples for orchestras and pianists. The first that comes to mind is Night on Bald Mountain which was featured in Disney’s film Fantasia, giving it mainstream status and has been used in popular media since. The other is Pictures at an Exhibition, originally written for solo piano and later orchestrated by Ravel (and others, but Ravel’s is best, revealing his supreme gifts at orchestration). This work depicts someone strolling through an art gallery, and the works of art themselves.