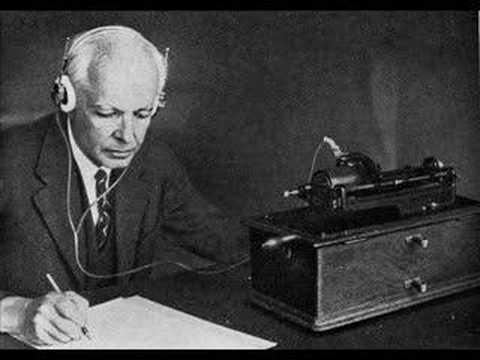 Bartok notating the music he recorded from villages around Europe

The whole concept of “ethnomusicology” can be attributed to Bela Bartok, the Hungarian composer who travelled with fellow composer Zoltan Kodaly to the countryside to collect and research Magyar folk melodies. This involved schlepping a heavy phonograph everywhere to record the villagers singing them. The music, once considered gypsy music, was based on the pentatonic scale, very close to those from Central Asia, Anatolia, and Siberia. Bartok incorporated these melodies into his own works, which also drew upon the classical tradition and strong elements of modernism. He also wove into his works the folk music of Hungary, Romania, Bulgaria, Moldavia, Algeria, and Turkey. Some of his works sounds modern even by today’s standards; others, like rustic dance tunes.

Bartok emigrated to the United States in 1940 to escape the war. He never quite took to the States, and was never embraced as a composer. He was, however, acknowledged as a pianist, ethnomusicologist, and teacher. He became an American citizen shortly before he died in 1945. For many professional musicians, his legacy lives on in his works for piano, string players, and orchestra.

An Evening in the Village is the first of five pieces as part of a suite called Hungarian Pictures. It was originally written for piano, and this is Bartok’s own orchestrated version.