A calm, understated, lyrical side to Rachmaninoff 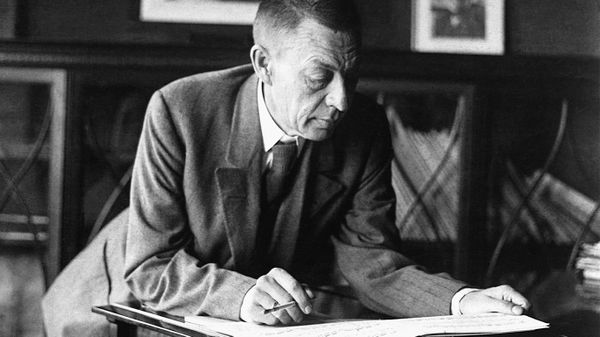 Sergei Rachmaninoff wrote symphonies, piano preludes, dabbled in chamber music and opera … but it was works for piano and orchestra that are the barn burners, the blockbusters, the all-time “let’s sell this house out” programming trick of all symphony presenters across the land. Despite his fantastic technical piano writing, he was capable of deeply personal lyricism as we’ll hear in a moment.

Rachmaninoff suffered a serious bout of depression in his mid-late twenties, and was so self-critical, he couldn’t compose anymore. His aunt suggested a visit to Dr. Nikolai, a music lover and physician. Keeping an open mind, Rachmaninoff underwent hypnotherapy and psychotherapy every day for four months. It worked. He wrote the Piano Concerto No. 2 in C- which earned him acclaim and awards. The monstrously difficult Piano Concerto No. 3 in D- followed a few years later, which is known for having some of the blackest notes on the page.

For something a little different, check out the Vocalise, a calm, understated work originally composed for voice and piano. The singer can use whatever vowel the singer chooses, and while written for soprano or tenor, it can easy be transposed to suit any voice type. It’s been arranged for cello and piano, orchestra, and chamber ensemble. Here’s Classical FM favourite Daniil Trifonov performing the Vocalise for solo piano, arranged by the artist himself.