The Indigo Project and the creative force behind Tafelmusik’s forward-thinking programming: Alison Mackay 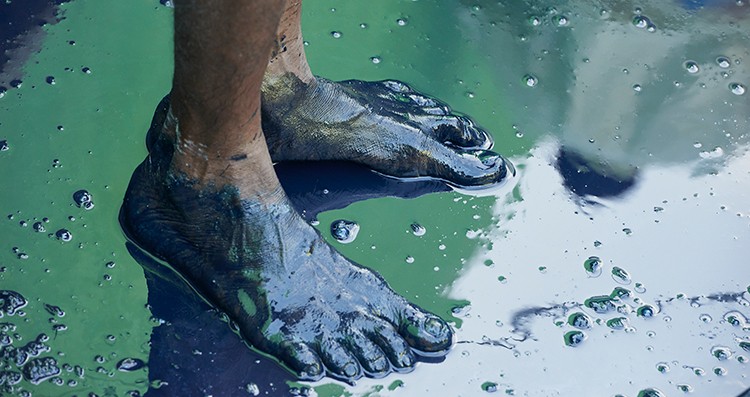 Tafelmusik is doing all kinds of interesting things by modernizing the presentation of Baroque music alongside its traditional concert offerings. They hold some of their concerts, the Haus Musik series, in bars, where it’s okay to move about and grab a drink during the music. Even the marketing looks alternative with untraditional images.

Alison Mackay is the person behind the forward-thinking presentations at Tafelmusik. She stepped down from her double bass position last year, but remains an imaginative force with the organization. A fund was named in her honour, The Alison Mackay Innovation Fund, dedicated to supporting invention new projects. The Indigo Project is one of her creations.

The Indigo Project sounds like a pop band than the title of a Tafelmusik concert. I love it. I’m so used to seeing marketing images of angel sculptures in churches – when I visit the show info page, it’s a pair of feet in mucky, inky dye – explain the concept of this concert.
Yes, isn’t it a wonderful photo? It seemed like a perfect illustration for the concert, which is an exploration in music, words, and images of the influence of indigo dye on the culture and economy of Europe and India in the seventeenth and eighteenth centuries.
The photo was taken by one of our partners in the project, Tim McLaughlin of Vancouver, who works with MAIWA, a Canadian company dedicated to the support of small agricultural and manufacturing operations in India. They are global experts on the use of indigo and have given invaluable advice, images and film footage to the project.

That’s an amazing connection. What do you say to the purists who prefer an all-Baroque concert all season?
It’s very understandable that some audience members count on Tafelmusik to provide music-only performances of our beloved baroque music! After all, it’s what the orchestra loves to do most. But from time to time (perhaps once a year?) we can’t resist placing our core repertoire in some kind of social context that we hope will shine a new light on the music and energize the musicians with inspiration from the virtuosity of our guests from other traditions. We’re thrilled to be collaborating in this concert with singer Suba Sankaran and her father, the eminent South Indian percussionist, Trichy Sankaran.

I like that there’s a core repertoire, with room to shake things up. Tell us about your programming concepts – you mix music with political and social history. Is this a new thing for you?
It’s an approach that I’ve been drawn to for the past dozen years or so as a way of enriching the orchestra’s own understanding of its repertoire and as a way of engaging audience members by exploring social topics related to the music. It’s important for me that the connections between the music and the other elements be authentic and historically accurate, but I hope that the event always feels like a concert, not a lecture or a slide show. Each project takes around two years to develop and invariably the research for one project suggests a theme for the next.

Two years! I had no idea. What can the audience experience during this concert?
The orchestra will be performing music from England, France, and Italy with works by Lully, Handel, Corelli, and Stradella. The Sankarans will be presenting music from courtly traditions that were also developed in the 16th-18th centuries. We will also be exploring some non-classical repertoire from 17th and 18th century, from Europe and India – folk songs, ballads and street songs.
There will be stunning images and film projected on a huge screen behind the orchestra and a script narrated by Cynthia Smithers, a wonderful young actor and singer who is well-known to audiences in Stratford and Toronto.

Ok, this sounds pretty cool. You’ve even managed to include Toronto students in the community with a quilting project that will be displayed in the lobby. Tell us more about that.
One of the most exciting aspects of The Indigo Project is the student participation, both on stage in the form of two choirs from Earl Haig and Unionville Secondary Schools, and behind the scenes: Grade 10 students at Marc Garneau Collegiate Institute are taking part in a collaborative experiment in indigo dyeing. With help from their art teacher Hilary Masemann and textile designer Kate Austin, students have created blue squares embellished with their own personal tokens representing the bonds of friendship and family. These squares will be combined to create a quilt, which will be displayed at Trinity-St. Paul’s Centre during the concerts. We can’t wait to see the finished quilt!

What else coming up this season the audience simply can’t miss?
There are some wonderful concerts coming up – the Bach St. John Passion (March 26-29), The Goldberg Variations arranged for orchestra by Elisa Citterio (April 22-28) and A Handel Celebration, (May 21-24) which will be recorded for the Tafelmusik Media label. I’ve retired now from playing in the orchestra, but I’ll definitely be in the audience for all three of these concerts. I’ll hope to see you there!