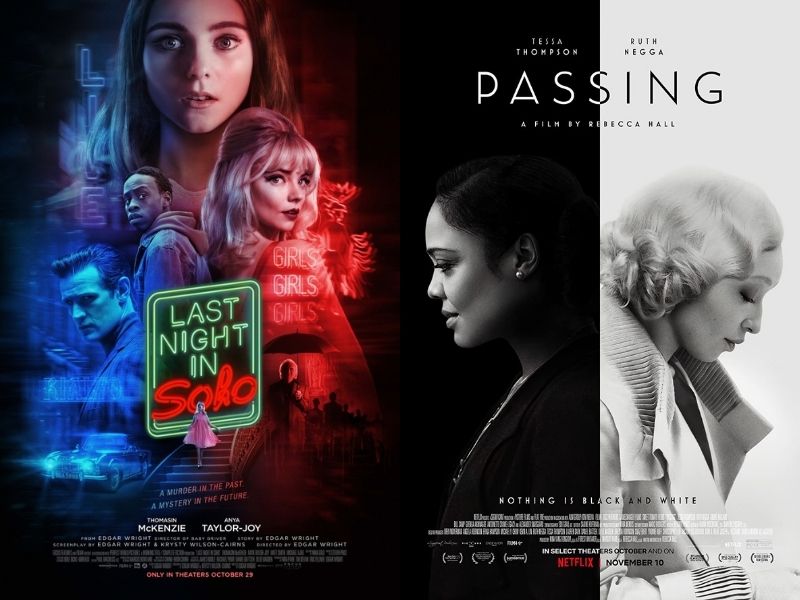 Ain’t it hard to be a Woman?

It’s about time for the Brits to make films that dramatize their subversive, brilliant days of the Sixties. Twenty years after the War that ultimately transformed the Empire into a Commonwealth, defeated Churchill by electing the socialist Labour Party to power and started to encourage Blacks from the colonies to “come home to the motherland,” England emerged out of poverty to re-enter the pop world of the West through rock music, sexy working-class films and theatre and the decade’s coolest fashion statements. It was suddenly very hip to be British in the ‘60s, whether playing guitar, wearing a mini-skirt or acting tough while speaking like a labourer or immigrant.

Edgar Wright, the director of such hits as Shaun of the Dead and Baby Driver offers us a darker Sixties Britain in Last Night in Soho. His initial celebration of London gradually turns nightmarish. Wright has crafted a tale of innocence betrayed while showing moments of the glory that was ‘60s U.K, still admired to this day.

Set-in present-day London, Wright’s Last Night in Soho introduces us to Ellie, a naïve girl from a small town, who imagines making it big as a fashion designer. She’s young, broke, imaginative, and pursued by a lovely Black boy in her class, John. Quite soon, she finds a flat owned by Ms. Collins, a stylish enigmatic denizen of their downtown neighbourhood.

Ellie is a huge fan of the Sixties, when her late mother and very much alive aunt Peggy spent time in London. Though things didn’t work out for them, Peggy hopes that Ellie can make a success of it in present-day London. (Ellie is played effectively by Thomasin McKenzie, who was wonderful as the Jewish young woman in Jojo Rabbit.) Although Ellie shows talent in school and loves her flat, her life changes quite quickly. Always a dreamer enamoured of the Sixties, Ellie succumbs to a nightmare world as she struggles to sleep.

In her dreams, vividly portrayed by Wright, Ellie is an observer to an affair between the gorgeous self-possessed Sandie (Anya Taylor-Joy) and the arrogant, handsome Jack (Matt Smith), who decides to manage her. Horrifyingly, Jack’s management turns into pimping Sandie, first to get her gigs as a singer and then into being a prostitute. Ellie finds it harder and harder to deal with Sandie’s story, which feels all too real—and likely was the narrative of too many young women during that time.

Occupying a terrain in both her dream and waking worlds is the “silver haired gentleman,” (Terence Stamp) a mysterious menacing figure who knew Sandie back then and offers drinks to Ellie now. Ellie’s friend John tries to help her, but his efforts are repulsed. At first, Ellie tries to get the police involved but she has no evidence that anything ever happened to Sandie.

Eventually, Ellie is driven mad, or nearly so, with her story of Sandie unresolved. She goes to her landlady, Ms. Collins (Diana Rigg), for the truth but nothing is obvious nor straight forward when dealing with her. Ellie comes close to being doomed by the past, which is way less glamourous than what is remembered of the Sixties.

Last Night in Soho is a very dark film, but Edgar Wright has cast it wonderfully well. Kudos should go to Terence Stamp, Rita Tushingham and Margaret Nolan who genuinely embodied Britain’s past and are excellent in the film. Thomasin McKenzie, Anya Taylor-Joy and Matt Smith are fine, too, but special mention must go to Diana Rigg, who is terrific in this, her final film role.

If there are reservations about Last Night in Soho, it’s that the nightmare seems inappropriate to the subject. Was the Sixties really that bad? Wright’s film is effective, but it feels as if an opportunity was lost.

Rebecca Hall, director & script based on the novel by Nella Larsen

Two well-dressed attractive women see each other across a posh luncheon room. It’s the late 1920s and the two, “Reenie” (Tessa Thompson) and Clare (Ruth Negga), went to school together but haven’t exchanged a word for over a decade. Clare, blonde, effervescent and impulsive, practically skates across the room to greet her old schoolmate, who is hesitant and pretends to not recognize her for a moment. Sweeping away all objections, Clare insists on “Reenie” coming up to her hotel room, to have cakes. There, “Reenie” meets John (Alexander Skarsgard), Clare’s husband, who is an out and out racist. Without a word being spoken, you understand the situation. “Reenie” and Clare are “Negroes” pretending to be White; they’re “passing.” In “Reenie’s” case, it’s for an afternoon but for Clare, the story is far more dire. What will the two do now that they know each other again?

Rebecca Hall’s directorial debut, Passing, is a whip-smart film dramatizing a deeply scarring situation that occurred for over a century in the U.S. and elsewhere, particularly in Europe. Even when slavery was abolished in the U.S. towards the end of the Civil War, racism continued to grow like a stink weed in America and throughout the world. And yet, love is love and sex is sex, so blacks and whites and Indigenous people and people of every colour and creed, continued to make babies despite the risks. Their mixed-race children encountered anger and discrimination, since they weren’t “pure,” and as adults had to decide how to deal with a world in perpetual racial conflict. For over a century, one of the options available to some Blacks was to “pass” as Whites, which allowed them the freedom to be part of the power structure that despised them but dominated the world.

Rebecca Hall’s father is the legendary English director Sir Peter Hall and her mother, the opera and jazz singer Maria Ewing, is of African American, Scottish and Indigenous descent. She is clearly pursuing a personal interest in Passing. A film star who has always appeared to be a white, upper crust Brit, Hall has chosen to “out” herself with this film about women who could pretend to be part of the West’s dominant culture. The two leads in her film, Tessa Thompson and Ruth Negga, are also of mixed heritage, though they would identify as Blacks these days. But before the ‘70s, could either have “passed” as White?

Hall has adapted a novel written in the 1920s during the apex of a time when some Blacks chose to pass as Whites. Nella Larsen, one of the top writers during the Harlem Renaissance when Negroes were sought after as exotic creatures to be extolled by the white “smart set” of intellectuals and partygoers, wrote a story that could have been autobiographical. She was mixed-race and spent years in Holland when she was young. The story of “Reenie” and Clare was personal to her. As a woman in Harlem during the Roaring Twenties, she was suddenly important but much of her life was spent as a nurse and a librarian. Such is the fate when you have your 15 minutes of celebrityhood.

Hall’s film, like Larsen’s novel, refuses to be a melodrama but it’s not exactly a character study. “Reenie,” we discover, is unhappy but we never discover why. Her husband Brian is a doctor who loves her and their two boys. But “Reenie” is no longer sexually attracted to him; indeed, she seems to be languid, mistrustful and passionless with everyone. Clare’s story is easier to unravel but what she wants isn’t so obvious. Attractive and slightly desperate, she wants to come back to Negro culture but “Reenie” is dubious about who she is and then there is the major issue of her racist husband. What will happen when he finds out that Clare is spending her time with “Reenie,” who isn’t White and lives in Harlem?

Hall has made the smart choice of shooting Passing in black and white. The film moves slowly, with dialogue delivered like a classic theatrical production. The lead actors, both brilliant in their roles, are superb but reveal very little about the inner lives of their characters. Hall’s film is an impressive achievement and one wishes she will do more work. Passing is in theatrical release at TIFF Bell Lightbox now. It will be on Netflix on November 10. It’s definitely worth seeing, and talking about, whether streaming or in theatres.