Review of “Irresistible”, A Political Comedy from Jon Stewart 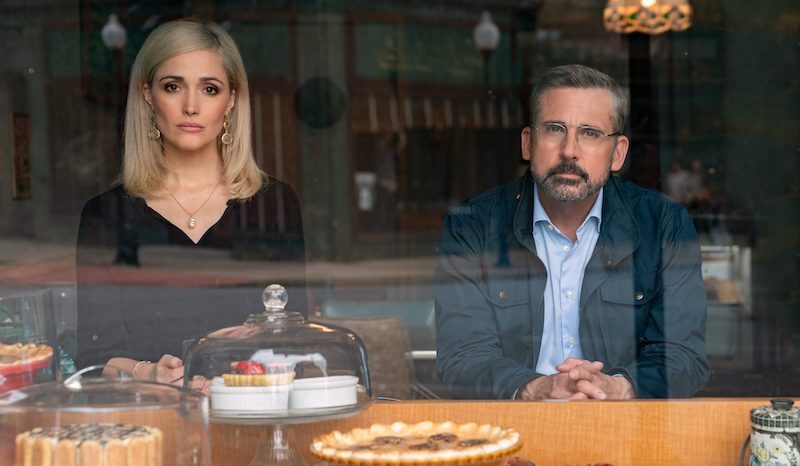 Streaming as a VOD (Video on Demand) rental on Apple, Amazon, DirectTV, etc.

Since his departure from The Daily Show in 2015, Jon Stewart’s immense fan base has been waiting for him to deliver a political comedy to match his peerless TV series. It was always going to be hard to match the expectations laid on Irresistible, his first film comedy, and sadly, Stewart hasn’t hit a home run. That doesn’t mean that the film isn’t funny  or lacks Stewart’s point-of-view. There’s much to like about the film but absolutely Irresistible it’s not. 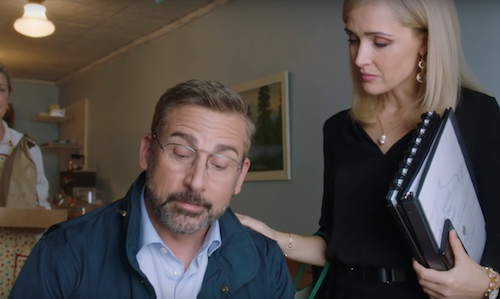 Stewart’s premise is certainly compelling. A Youtube goes viral showing an ex-Marine, Colonel Hastings (Chris Cooper), denouncing the small town establishment in Deerlaken, Wisconsin for not treating its immigrant community fairly. Shown the video, Gary Zimmer (Steve Carell), an ace strategist, who had led Hillary Clinton’s failed Presidential campaign, immediately sees a chance to reclaim the heartland of America for the Democrats. Trading in his caprese salad for a “beer and a Bud,” Zimmer is soon in Wisconsin, meeting the locals, convincing Hastings to run for Mayor, and meeting his brainy beautiful daughter (Canada’s Mackenzie Davis).

With Trump riding high in his first year in office, the last thing the Republicans want to do is yield a suddenly high profile mayoral race to the Dems. They send their best strategist Faith Brewster (Rose Byrne) to take on Zimmer. Byrne is a great comic performer and she’s at her best here, channeling all of the blonde Fox News stars at once while engaging in an increasingly sexualized sparring match with Carell.

As the film escalates, so do the dollars spent on the campaign. Brewster grabs millions from die-hard Republicans while Zimmer flies the Colonel to Manhattan to a fund raiser replete with the phoniest of rich liberals. In a key moment, Chris Cooper’s Colonel is allowed to sadly denounce the spectacle of all this wealth being misspent on his campaign, and not for Deerlaken. Naturally, this draws more guilt and money from the New Yorkers.

Though not  a technically smooth director, Stewart scores points with video perfect replicas of the inanities we see on CNN and Fox News: the experts yelling at each other on a Zoom-ish screen, the blondes cattily taking on the Democrats and the news ‘casters overemphasizing what’s happening in a small town in Wisconsin. Stewart places Carell in the classic comic situation of the outsider trying to fit in with the locals. As Zimmer, the D.C. sophisticate, Carell thinks he’s above the yokels of Wisconsin but he can’t understand them—their friendliness, directness and quite competence—and that makes his job of getting their votes that much harder. This willful blindness costs Zimmer the full support of the Colonel’s daughter (Mackenzie Davis)—he’s too quick to assume what she’s all about. In a move that echoes MeToo, Stewart also shows that a desperate campaign manager like Zimmer too easily abuses his assistants; unfortunately for the film, this isn’t played for comic effect. It’s a serious issue, of course, but Stewart should have made that point with laughs, not  just a lame apology.

There’s much to like about Jon Stewart’s Irresistible. The casting is impeccable from Carell and Byrne to Cooper and Davis to Natasha Lyonne, who is superb as a brilliant pollster who makes a big campaign mistake. In the final minutes, the film gets increasingly complicated, which makes the film that much more Meta—and fun. (You’ll have to see the movie to understand what I mean.)

The main point of the film is that democratic elections in the U.S. have been corrupted by the Almighty Dollar. Too much money is spent to win and not enough on how to fix fundamental ills in society. Amen to that, but we can—and should—expect a truly wicked approach to politics from Jon Stewart. Let’s hope that next time he’ll fulfill our expectations. As this film demonstrates, he has the tools to do it.