Film Review: The Father and Notturno 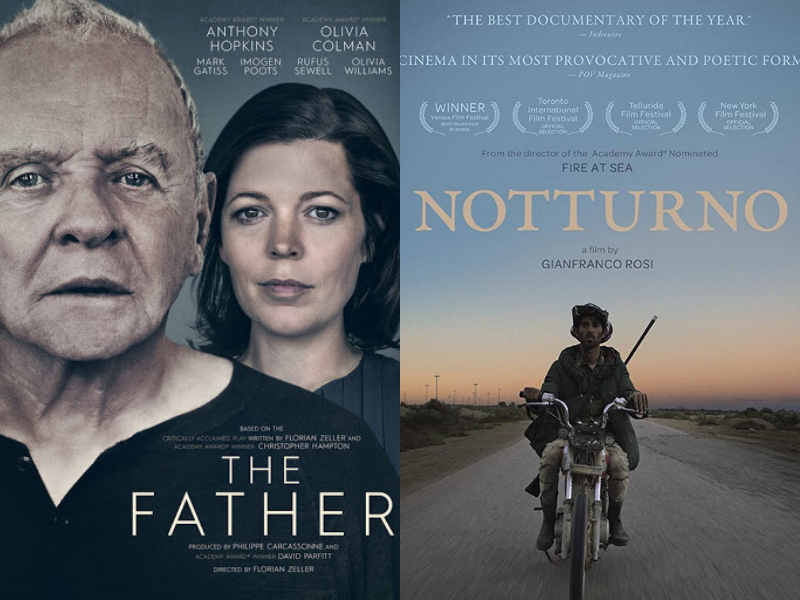 The Father and Notturno

These two are must-sees

Based on Zeller’s play Le Pere

A documentary feature by

The Father
What is it like to experience dementia? As we grow older, most Zoomers have seen it play havoc to aged members of their family. People looking distraught, finding it difficult to make connections in their thoughts while conversations go awry. Some get angry and physically lash out. Others retreat, not wanting to let people know what they think they’re feeling and seeing. We all fear that it can
happen to us.

That may be why Florian Zeller’s French play Le pere, a huge hit in Paris, transferred so well to London and New York (thanks, in part, to the wonderfully literate translation of Christopher Hampton). It’s a play that startlingly and incisively brings you into the mind of someone dealing with dementia. Now, Zeller with screenwriting assistance from Hampton (Dangerous Liaisons, Atonement) has turned it into a brilliant feature film starring Anthony Hopkins and Olivia Colman. Both are nominated for Oscars as are Zeller and Hampton for Best Screenplay; so is the picture.

Anthony is a tough and wealthy old codger who has lived in a luxury apartment for decades. Now he’s battling to stay alive in his home. His daughter Ann comes home to tell him the distressing news that she’s moving to Paris with her lover. How can he function without her? As she goes off to get chicken for dinner, he
hears noises in the living room. When he walks in and demands to know who it is, a snide man points out that he’s Anne’s husband. Then she arrives with chicken and goes off to make it in the kitchen. Anthony follows her, speaking about her husband, which causes Anne to deny anyone being there, especially her divorced ex.

So the story goes, with two men Mark Gatiss and Rufus Sewell playing the lovers in Anne’s life, past and present, two women, Olivia Colman and Olivia Williams playing Anne and two women, Imogen Poots and Olivia Williams playing the caregiver, Laura. Endless variations of the same scenario play before Anthony’s eyes. Does his daughter look the same? Is she leaving for Paris or staying in London? Who is her husband? Is the apartment his or hers?

The dialogue is short, precise, funny, poignant and vicious. It has been rightly compared to that of Harold Pinter, the master of turning the ordinary into the uncanny. We’re never sure what’s real and what is not. Scenarios that play with reality have existed for quite a while but this isn’t a satire or an avant-garde production.

The Father is about an important subject, facing dementia, but it’s done in a truly artful and unsettlingly way. Hopkins and Colman deserve Oscars: these are performances that will stand up for decades. So will the Zeller/Hampton script. Is this their year for Academy Awards? Probably not but The Father is a must-see in
any case.

Probably the finest film not nominated for an Academy Award this year is Notturno, Gianfranco Rosi’s gorgeously shot documentary about life and death during the nearly continuous warfare that recently took place in Iraq, Kurdistan, Lebanon and Syria. Rosi, whose previous feature doc Fire at Sea was nominated for an Oscar four years ago, has spent much of the time since then covering the
terrain of Islamic western Asia, an area devastated by constant battles with ISIS and the ruined states of Iraq and Syria, which the terrorist empire claimed as its own.

One would expect that Notturno would be filled with countless bloody images, buildings being destroyed and sounds of bombs, bullets and artillery whizzing through fields filled with dead or wounded bodies. That’s not the case at all. Rosi has taken a more creative approach in which the effects of war on the zone are viewed: children sharing their traumas with psychiatrists and teachers; abandoned streets with shops and houses swaying in the wind; men in canoes rowing through seas of oil; military men and women prepping for future battles.

Notturno is an observational film, which encourages the viewer to hear the distraught voices in crisis, to see the ruined shards of glass, metal and rocks where immense buildings used to be; to ponder the meaning of imperialism, demagoguery, and religions that show no pity to those who disagree with them. Rosi has found a special place to shoot his film, on the edges of terror and death, revealing what is taking place where the worst impulses of human beings are
played out.

The film opens with a wide angle shot of a field. Entering quickly is a group of soldiers running past the camera to the end of the pitch, where other military are gathering together. The camera stays in place as a second group runs past with the sound of their boots on the ground becoming more obvious. When it happens a third time, you’re ready for the sounds and images of the runners, leaving time
to see that it’s been raining but isn’t now. In another scene, Rosi’s camera watches as a troop of women warriors in uniform get together in a house and arrange for the evening they’ll spend before heading off to a battle. In a devastating sequence, a group of Muslim mothers in chadors are seen grieving in an old fort, their nails clawing against the walls, as we realize that their sons have
died there.

Though Rosi uses silence as a tool throughout Notturno, he does employ dialogue in two sequences to great effect. In one set of scenes, children in school are asked to draw the terrifying things that have happened to them during the war. We see the stick figures and colourful imagery of little kids—powerful in itself, but then it’s explained: one of the boys starts denouncing ISIS as the ones who caused death and destruction. There’s nothing wrong with having scenes like that; it’s just unusual for Rosi. And in the most explicit and moving sequences, we’re invited to watch patients in a psychiatric institution act out parts about the tragedy that’s been visited on their “Homeland.”

Rosi’s desire to be explicit is understandable. It would be hard to see what he witnessed for three years and not decide to denounce ISIS. Notturno may have been intended to be an observational film, neutral in its approach, while denouncing war. What Rosi created instead is a brilliant film, which occasionally abandons its neutral attitude, but is truly poetic in the darkest and most tragic
ways possible.