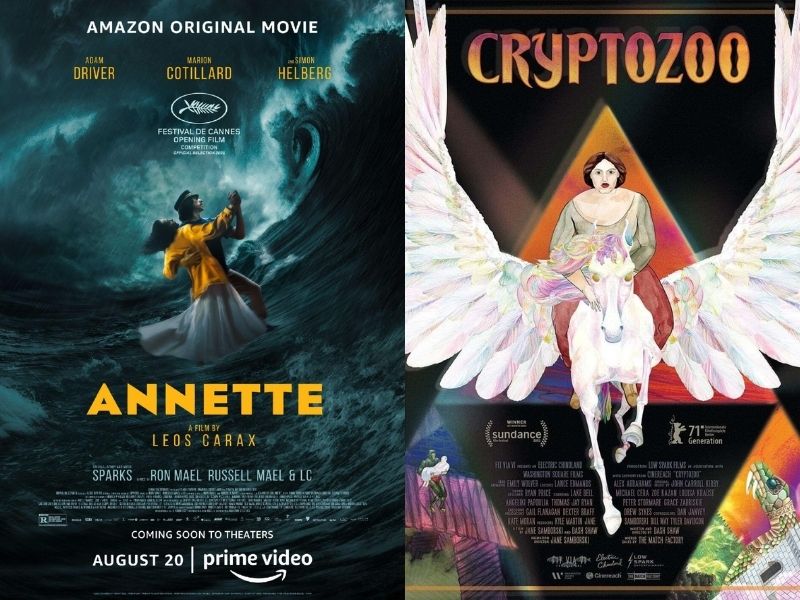 Strange Tales for the Summer

Annette is one of the most bizarre and fascinating films of the year. It’s a rock opera in which a controversial performance artist named Henry McHenry, played in mesmerizing fashion by Adam Driver, falls in love with, marries and then loses the love of his life, Ann (played wonderfully by Marion Cotillard), an opera singer. Their relationship was labelled “Beauty and the Bastard” by the media and that dire prediction plays out in the film. Before she dies, Ann has a child named Annette, who is mainly played by a puppet until a young actress, Devyn McDowell, replaces her for a devastating denouement. Any lover of opera can see the bold outlines of its typically tragic narrative, but the music is rock, and the direction is by the astonishing Leos Carax (Holy Motors, Pola X), whose films are brilliant and always controversial. Annette was always going to be challenging since it’s a rock opera—but, of course, the film’s creators have made it even more complicated to totally comprehend and enjoy.

Rock operas are inherently strange since rock is best enjoyed in two and a half minutes and opera in two and a half hours. Some have worked—Tommy, Ziggy Stardust, Jesus Christ Superstar to name three—but most have been overly pretentious and badly composed. Ever hear of any of these: Days of Rising Doom, The Earth Sings Mi Fa Mi, The Last Temptation, Maggots, My Arms, Your Hearse? Can’t say for sure, but we may be better off without ever listening to them. But that doesn’t mean that we should dismiss all rock operas.

Annette is, of course, the most highly anticipated rock opera in years since it’s the creation of Carax and the Sparks Brothers, aka Ron and Russell Mael. The subjects of Edgar Wright’s documentary released earlier this summer, the Sparks Brothers are singers and composers who love to create work that relies on bizarre storylines and baroque characterizations. Though American, they’re often mistaken for being British and their rock cabaret styling over the years resembles the work of David Bowie, Pete Townsend of the Who and Ray Davies of the Kinks. Their collaboration with Carax was always going to be exciting and divisive yet appropriate for an attempt at a making a new rock opera.

Great opera productions are about more than the music. A Chereau or a Sellars or a Visconti created audacious sets and an impressive visual look to the pieces they directed. Carax has taken a leaf from their page, designing a rock opera film that is stunningly beautiful. Everything that Carax has created screams “spectacle.” In a sequence featuring Henry as an acclaimed performance artist, he warms up behind the stage, making moves like a boxer and then enters to a great mass of fog, which is slowly dispersed as he creates a rambling monologue that is ruefully funny while being subversively honest. On a ship late at night with waves hammering, the camera roves as Henry confronts Ann with his jealous rage mixed with an overwhelming love for her. Walking in his enormous back yard towards the pool with his frenemy the Conductor (an underused Simon Helberg), Henry’s anger is in check as the camera covers a scene of entrapment. To say the least, these are bravura sequences in Annette.

The problem with Annette is that there is little shading in the character of Henry. Adam Driver is excellent in the part, but the scenario and libretto doesn’t allow us to discover his depths. It’s too clear that he is, indeed, a “bastard,” a brute who will only cause pain to others. True, there are black hearted villains in opera—Macbeth and Bluebeard for two—but Henry doesn’t evoke enough terror or pity. Though the final scene with Devyn McDowell as Annette denouncing her father is extraordinary, it doesn’t complete the drama satisfactorily.

Still, Annette is an amazing creative endeavour, one worth watching—especially if you have Amazon Prime.

With Disney and Pixar perpetually flexing their gargantuan fiscal muscles and enormous special f/x teams dominating the Marvel and DC comix worlds, it’s wonderful to see an animation film that didn’t cost hundreds and millions of dollars to produce. Cryptozoo is that rara avis, an Indie animation feature that was made by a couple, not a corporation. Dash Shaw and Jane Sambroski made Cryptozoo together over the past five years and though there must have been lots of business decisions made during that time, it’s evident that the film they’ve created is personal to them as a duo in life and art. Having debuted at Sundance, still the best festival for Indie American fare, Shaw and Sambroski’s film is launching this week on the Apple TV app/iTunes during a strange August when a quirky animated film might just do well.

Cryptozoo is a counter-cultural fantasy, which feels a lot like the Sixties—think Yellow Submarine and comix artist R. Crumb—even though Shaw and Sambroski are far too young to have experienced the hippie era. (Apparently Shaw’s dad did live in San Francisco’s legendary Haight-Ashbury district back in the day and must have told some stories to his artistic son). The film starts with a couple making love in the countryside, getting high afterward and climbing a fence where they encounter a unicorn. The dialogue is evocative of Easy Rider and the animation, mainly simple black and white drawings, feels like that earlier time and place. Then, disaster strikes, as it often did back then, and we shift into a more contemporary time and place.

The animation shifts to full colour as we’re introduced to Lauren (voiced by the brilliant Lake Bell), a veterinarian who is a tough and physically skilled woman backing up her mentor Joan—older, wiser and plenty rich—in gathering up and hiding cryptids: creatures whose existence is disputed and unverified. A cryptid could be a yeti, for example, or a unicorn, or a Gorgon or any figure from world mythology or fantasy and science-fiction books or graphic novels.

Joan wants to protect these creatures by constructing an immense cryptozoo, where they can cavort and mingle with others, while she makes an immense mall where goods can be sold to keep the zoo and the cryptids alive and happy. It’s a very strange idea of paradise: making branded products in a theme park and zoo reeks of a Disney conception of how to save the world. But Joan and Lauren believe in it and spend time persuading Phoebe, their new Gorgon-esque “muscle” to buy into it, too.

Happily for the film, a plot gradually emerges. Turns out that there are bad guys—there always are—who are bounty hunters, led by the evil Nicholas (nicely voiced by Thomas Jay Ryan). With Gustav, the faun, playing both sides of this game, confrontations ensue, leaving several cryptids dead and possibly extinct. But the big game for Lauren and Nicholas isn’t the random winged or earth-bound mythological critters. What they want is the baku, a sort of piglet with an elephant’s snout, which can suck up your nightmares and take them away permanently.

Will you be charmed by this odd film? I was, but it’s true that Dash Shaw and Jane Sambroski dawdle a lot and some of their ideas don’t make much sense. Hey, it’s a bit like the Sixties, man. Cryptozoo is a strange trip that is worth taking, at least once.