Film Review: The Hand of God & The Souvenir: Part Two 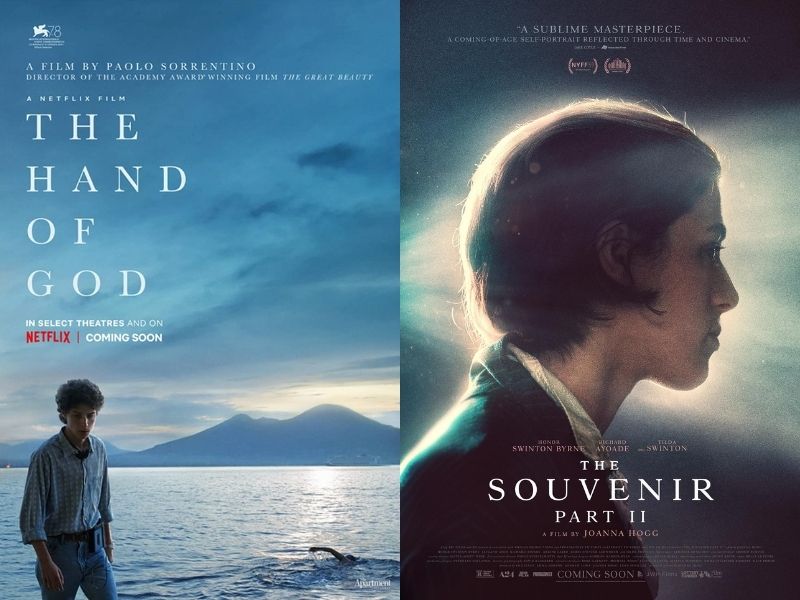 Autofiction: films inspired by the formative years of their directors

The Hand of God & The Souvenir Part Two

The Hand of God

The Neapolitan filmmaker Paolo Sorrentino’s return to the screen post-pandemic is his most personal work yet. The Hand of God is set in Naples in the mid-1980s when the rivalry between the prosperous privileged Northern Italy and the poorer Mafia-encumbered South was at its height and a 16-year-old boy like the film’s Fabietto Schisa would have loved three things: football (soccer to North Americans), women and his family.

Sorrentino was 16 in 1986 when Diego Maradona’s infamous “hand of god” illegal finger-assisted goal and a follow-up artistic winner beat England on his—and Argentina’s—way to a World Cup triumph. More to the point, Fabietto and, in real life, Sorrentino, cheered on as Napoli, Maradona’s professional club, won the Italian Serie A championship, which was the first time a team from the south won the prestigious trophy in Italy. In the film, one gets to appreciate Naples through Maradona and his impact on not just the city but the entire region.

Sorrentino has already achieved Maradona-like glory in filmmaking circles for The Great Beauty, his Oscar, BAFTA, Golden Globe (and countless other) 2013 award winner, which was highly praised for its grandiose style and intense political vision. He’s most often compared to Fellini, with whom he shares a profound love of pictorialism, big bold scenes and occasionally vulgar eroticism. All of this is on display in The Hand of God, though it’s somewhat dialled down for what is clearly a smaller, autobiographical work.

Still, the film starts off in typical Sorrentino style with a lurid account of his crazy aunt Patrizia’s encounter with a rich man pretending to be San Gennaro, the patron saint of Naples, accompanied by his trickster friend, Monaciello, “the little monk.” All of the Schisa men are besotted by Patrizia’s beauty including Fabie’s wonderful older brother Marchino, especially when she appears naked at the family picnic. The women as well as the men are eccentrics, none more so than Maria, Fabietto’s mother, who loves to pull pranks. The best—and it’s quite elaborate—involves Fabie’s father Saverio being attacked at night by a bear, or rather a tall boisterous man in a costume, who is truly terrifying for about 10 hilarious seconds. One could call Saverio, a top bank employee “put upon” but Fabietto is wised up—now that he’s 16—that his father is actually having a long-term affair with one of the bank’s employees.

Still, Saverio and Maria remain in love with each other until they reach a shocking demise by falling asleep and dying due to inhaling carbon monoxide caused by a leak in their chateau. Fabietto, and in reality Paolo Sorrentino, was spared because he stayed at home to watch Maradona play in Serie A. As one of Schisa patriarchs tells him at the parents’ funeral, it was truly Maradona’s hand of god that saved him.

Like most autobiographical works, Sorrentino’s film tends to wander between accounts of his first sexual encounter, tales of friendships with other young Neapolitan men and a resolution of Patrizia’s life, with her placed in what was still known then as a home for the insane. In the end, Fabietto meets a film director who shocks and stirs him into deciding to become, well, Paolo Sorrentino, cineaste.

Hand of God is a rude, occasionally funny and moving account of life in Naples 40 years ago as it played out for a young man, who eventually found his way. It isn’t an award-winner to rival The Great Beauty but if you love Italy and films with (occasionally over-the-top) style, this is a pleasant film to see.

With The Souvenir Part Two Joanna Hogg has achieved the nearly unachievable, making a sequel that is as good as her previous hit. She’s done it by taking a route similar to The Godfather, Part Two, which wasn’t directly about what happened to the Corleone family after the brutal conclusion of the famous first film. Coppola’s sequel wove two stories, which barely referenced the first film; instead, it was about events in the past and future.

Hogg is no Coppola, but she’s applied the same principle to her follow-up to a film that also had a fatal and tragic conclusion. That she’s done it in a way that avoids self-indulgence, and an overly romantic view of a deceased partner is remarkable. It’s matched by the creation of a new scenario for the survivor, who has to not only go on with her life but to remake herself as a mature woman and artist.

In The Souvenir, Julie, a gifted writer from a wealthy family fell in love with Anthony, a handsome upper-crust man who claimed to be working for the British Foreign Office. Reader, she married him (as Jane Eyre would have it), and poor Julie slowly discovered that Anthony had a terrible secret, which he had kept from her and his parents: he was a heroin addict.

The Souvenir is a beautifully made film of a doomed couple, caught up in a romance in 1980s London. Joanna Hogg won the best director prize at Sundance and the film went on to general acclaim, with many critics and audiences noting that Tilda Swinton, the director’s long-time close friend, played Julie’s mother and Honor Swinton Byrne, the acclaimed actor’s daughter, played the naïve, betrayed romantic lead. Not only were Hogg’s close friends involved in the film, but it also became quickly known that the love story, though certainly embellished, was based on a destructive relationship that Hogg had endured when she was a young media artist in London.

When The Souvenir Part Two was announced, there was curiosity and trepidation surrounding the project. What would Hogg do without a semi-autobiographical love story giving a strong structure to the film? It turns out that Hogg works just as well without much of a plot to hinge her film. Julie still grieves Anthony but is bewildered by him and his terrible ending. She visits his parents who are still suffering their loss and can do little for her. Julie goes to her parents, who are supportive of her but are similarly at sea regarding her involvement with Anthony and his true nature. Most of the film is taken up with Julie back in London, working on her graduate film, with a group of young feisty intelligent students. Hogg nicely evokes the debates, the creative bursts, the anger and the fun that is so much a part of making artistic work together.

In real life, Hogg made a social-realist short about life in Sunderland during the Thatcher years and then followed that up with a personal project, a more experimental work starring the young Tilda Swinton. In The Souvenir Part Two, Julie gives up on her Sunderland project and rebelliously makes her fantasy film. In both cases, she graduates and goes on the make cool, arty music videos—which is Hogg’s career trajectory.

What’s wonderful about the film is the way we not only see the rock/film/fashion/art scene in London but how work—creating fresh exciting new pieces—can pick someone up and make them whole again. That’s what happens to Julie in The Souvenir Part Two and we believe it, thanks to a terrific performance by Honor Swinton Byrne in the lead and the realization that Hogg survived and continues to prosper because of her own belief in the talent that has made these two brilliant Souvenirs.