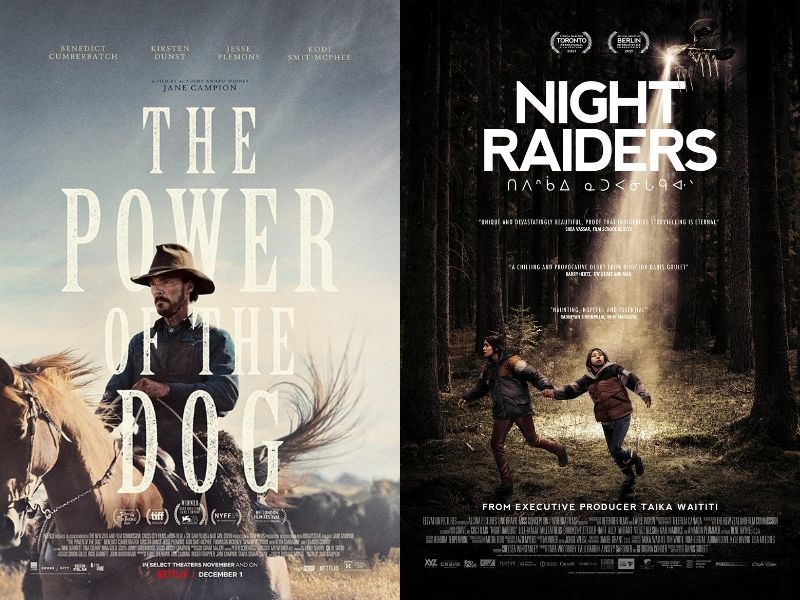 Top Films of the Year

2021 was a tough year for everybody but it hasn’t stopped excellent films from being made and distributed, by any means necessary to audiences worldwide. Whether we saw them at festivals, theatres, drive-ins or streaming, there was a plethora of fine drama, documentaries, animation and various hybrids to keep our attention away—if only momentarily—from the pandemic and strife that too often awaited us each day. As a year-ender, here are my top picks in feature drama, documentary and our own Canadian cinema.

The Power of the Dog, Jane Campion’s first feature film in more than a decade, is an astonishing comeback: a fascinating drama of sensitivity and dynamic strength. Set 100 years ago in the American West, the tale is that familiar epic: brother vs. brother after one marries someone who the other actively disapproves. Mixing wealth, power and sexuality, the film sizzles with passion and repressed emotions. Campion’s star power helped to attract a stellar cast: Benedict Cumberbatch—Oscar bait as the ruthless Phil Burbank; Jesse Plemons, a bulwark as his understated brother George; Kirsten Dunst, still beautiful and now a character actress, as George’s new wife Rose and, as her angular, skinny laconic son, Peter, Kodi Smit-McPhee. Though the film is a Western and there are fights and horses and revolvers, Campion has fashioned a brilliant commentary on American violence—particularly about bullying and the unsettling power of homosexuality.

Flee is that rarity, an animated documentary, set in contemporary Denmark. The film beautifully combines truly artistic drawn imagery with a remarkable rendering of the devastating life (so far) of Amin Nawabi, whose true name and those of his family and friends can’t be used for fear of reprisal. Nawabi was only a child in the early ‘90s when his mother arranged for everyone in their family to leave Afghanistan after their father “disappeared.” Life in Moscow, where they temporarily established themselves, proved to be fraught with dealings from the corrupt police. It took years—and many stories—before Amin found a true home in Copenhagen. Told through memories elicited on a psychologist’s couch, Flee is a brilliant character study, a tale of appalling adventures and a wickedly harsh depiction of what it’s like to be dispossessed of your home and family.

Danis Goulet’s Night Raiders is not only a fine film, but also a brilliant introduction to the kind of cinema we will see by Indigenous artists in the coming years: imaginative, compelling, politically subversive, respectful of their elders’ wisdom, often funny and immensely engaging. Night Raiders is set in 2043, when a militarized government is taking every child it can plunder, and turning them into agents of the state. Fighting against this Orwellian future, Niska (Elle-Maija Tailfeathers) has spent six years in the Canadian north, with her daughter Wasesee (a dynamic Brooklyn Letexier-Hart) until the 11-year-old is severely injured. Forced to allow her to be captured by the authorities, who will treat her damaged foot, Niska is persuaded to join a Cree movement to kidnap their children back to their homes. It’s through the resistance group that Niska discovers that she might be a prophesized figure from the North who will lead the Cree’s efforts to fight the totalitarian White rulers. Mesmerizing through to its unexpected and totally satisfying conclusion, Night Raiders is a thriller, a crowd pleaser, that will mesmerize audiences while having audiences root for Indigenous freedom against White conformism.

The winner of the Best Screenplay Prize at Cannes, this is a wonderful adaptation of a story by the acclaimed author Haruki Murakami. Ryusuke Hamaguchi wrote and directed the film, which elaborates on the ideas and atmosphere of Murakami’s original. It’s a wonderfully complex narrative revolving around love, death, sex, and the theatre. Set mainly in Hiroshima, though other Japanese locations are used wonderfully well, the action flows through an actor and theatre director, the middle-aged but still vigorous Mr. Kafuku (Hidetoshi Nishijima), who is directing his adaptation of Chekov’s Uncle Vanya for a festival. He casts in the role of Vanya a young actor, who was a protégé of his late wife, Oto. He, in turn, is forced to accept a young female driver, who the festival administration insists on employing. While the drama mainly unfolds between these three, many other characters are brilliantly etched in, particularly Oto, who is absolutely prominent throughout the first third of the film.

It’s still rare for a documentary to be a mainstream success but that’s what happened when director Questlove and his team assembled the highlights from a 1969 series of concerts performed in what was called the Harlem Cultural Festival. During this period when Black Lives Matter has become a rallying cry for so many enlightened people around the world, Summer of Soul’s archival restoration and release became a critical part of the cultural conversation. Not only does the film feature the brilliant blues playing of B.B. King, the inflammatory jazz of Abbey Lincoln with Max Roach and the intense vocals and lyrics of Nina Simone, the presence of Jesse Jackson, Martin Luther King’s heir apparent, and the Black Panthers can be seen and felt on stage and in the crowd. It was a time when revolutionary rhetoric was voiced out loud—and it still speaks to audiences now.

Drunken Birds, Ivan Grbovic’s new film from Quebec, (and whose producers worked separately on Roma and Incendies), raises elemental questions about home and identity, while spinning out a deliberately fantastic melodrama.  Stylishly shot and co-written by Sara Mishara, it focuses on Willy, a true romantic, who escaped a drug cartel and persuaded the overlord’s mistress Marlena to depart, too. Three years later, Willy is in Quebec, working on a vegetable farm, while trying to hunt her down. The contrast between the dignity of the Mexican workers and their patronizing and occasionally brutal Quebecois farm owners is readily apparent. So is the tragically dysfunctional Quebec family, who are coming apart at the seams that summer. Made with brio and sophistication, Drunken Birds is a truly artistic film with much to say, although its plot and dialogue could have been made more supple and ironic.