Film Review: The Lost Daughter and The Tender Bar 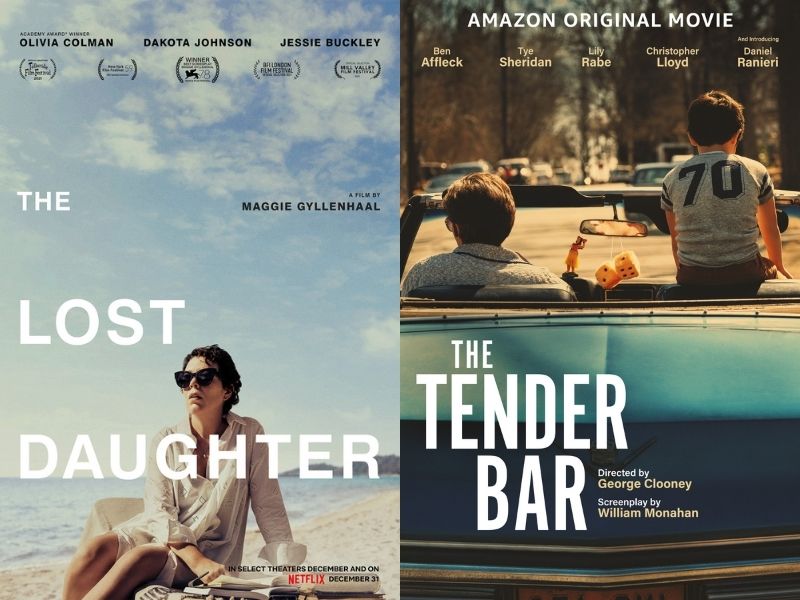 Are The Lost Daughter and The Tender Bar successes?

Maggie Gyllenhaal, director and script based on the novel by Elena Ferrante

Maggie Gyllenhaal’s directorial debut The Lost Daughter has been garnering praise and prizes since its fall debut at the Venice Film Festival, where she won the award for Best Screenplay. Since then, she and the film received four prizes at the Gotham Independent Film Awards and snapped up additional accolades–wins and nominations–with film critic associations in New York, Chicago and Boston. Adapting a novel by Elena Ferrante was never going to be an easy task so it’s noteworthy that many critics feel Gyllenhaal has done a fine job doing it.

Despite the praise, The Lost Daughter is not a complete success, hardly surprising considering it is a first film. There are narrative and character difficulties that might have been better resolved although it certainly merits the positive critical reception it’s received so far.

A major concern can be found in the depiction of the film’s protagonist, Leda Caruso, who is played in the contemporary story by Olivia Colman and in extended flashback sequences by Jessie Buckley. Though both are excellent, it doesn’t feel like they’re playing the same person. Buckley performs her with physicality—she’s a bright young mother of two daughter, juggling her children and husband as well as a rather demanding lover, an academic mentor who can influence her professionally as well as personally. Colman, by contrast, is practically inert and prefers to be alone, although she is willing to engage with the other guests at the Greek resort in which she is vacationing.

The plot seems as aimless as the 40-something Leda played by Colman. Although she’s staying at one of those European paradises set up for wealthy vacationers, Leda is drifting through her days, neither happy nor not, until an extended family of Americans shows up, disturbing her reverie. At first, she is abrupt with them, but Leda soon wins their trust when she finds Elena, the 3-year-old daughter of Nina (Dakota Johnson), who has wandered away from the beach, where they all were sitting and swimming. Suddenly, the women, especially the beautiful but easily distracted Nina and the controlling matriarch of the family, Callie, gravitate towards Leda. While the men ignore or scorn her, Leda develops a tentative friendship with Nina although it doesn’t stop her from doing something unfathomable: she steals Elena’s doll with no one knowing it, and despite huge efforts from the family to find it, refuses to give it back.

In flashbacks, Leda’s past is revealed. As a young and ambitious scholar, she—played charmingly by Jessie Buckley—has an affair with a famous prof and eventually is forced to decide between her career and family life. These sequences are more persuasive and consequential than the byplay with the doll in the contemporary scenes. Leda has to choose between her daughters and her academic life—something that genuinely happens to women today. Here, Gyllenhaal and the film is at its best. We see that her young daughters, lovely though they are, make constant demands on Leda, making it impossible to be a great scholar and mother.

Motherhood is difficult for Nina, too, as are the demands on being a loyal wife to a man who doesn’t understand her. The middle-aged Leda is suddenly confronted with a complex favour: will she give Nina the keys to her flat so she can consummate an affair?

Complicating the issues of motherhood, friendship between women and maintaining marriages is Leda’s mental situation: is she losing control of herself and her life on the Greek island? Why does she keep the doll for so long? And what is happening with her now grown-up daughters?

Gyllenhaal resolves most of these dilemmas although too much ambiguity remains for the denouement to be satisfactory. But she shows immense talent not only in working with actors but in creating tension in scenes where barely any truly exists and, especially, in showing the unromantic aspects of being a mother and wife. The Lost Daughter is a film worthy of rumination and genuine conversation: it’s a mature first directorial effort for Maggie Gyllenhaal.

William Monahan, script based on the memoir by J.R. Moehringer

Making a film of The Tender Bar, J. R. Moehringer’s memoir, is hardly an obvious choice for George Clooney. Moehringer isn’t a household name. His main claims to fame as a writer are his Pulitzer Prize in Journalism, a novel based on the life of bank robber Willie Sutton and ghost-writing Nike founder Phil Knight’s autobiography. Ted Hope, who greenlit the project for Amazon Studios before leaving the studio, Clooney and his producing partner Grant Heslov must have found something instructive or moving in Moehringer’s story to decide to make a movie of it.

What interested them–and Ben Affleck—may have been the sheer Americanness of the memoir. Though J.R.’s story isn’t exactly rags to riches, it is about reaching heights unachieved by previous generations of the Moehringer family. J.R.’s mother, Dorothy (a persuasive Lily Rabe), abandoned by her radio D.J. husband—referred to derisively as “the Voice,” plans for her son to go to Yale. Raised with a lot of love by Dorothy’s family, including a cantankerous but lovable grandpa (a part tailor made for Christopher Lloyd) and wise grandma (Sondra James), J.R. finds his father figure in Uncle Charlie (Ben Affleck), who runs a bar, Dickens, where he dispenses wisdom as well as liquor. J.R. does make it to Yale, where he falls in love with Sidney (Briana Middleton), a rich African-American, who, eventually breaks his heart but wises him up to the joys and perils of love.

If all of this sounds clichéd, it’s because it is. Tye Sheridan tries his best as J.R. and he is good in the role. I imagine all of the actors are doing more than they might for most directors; after all, Clooney was directing them. But the script and the direction let them down. One wants warmth in a film like this: scenes where you feel a connection between the actors and the characters they’re playing. Affleck is miscast though, once again, one suspects that he wanted to be Uncle Charlie. But Affleck simply isn’t believable as a lovable loser, running a bar, with endless time to spend with his nephew. Since the relationship between Charlie and J.R. is one of the keys to the film, this is a serious gaffe.

The Tender Bar is a film that one wants to like. This is the life story of a journalist who made something of himself and was raised with affection by an extended family. Films like this should be made and kudos to Amazon, Clooney and Affleck for making it happen.