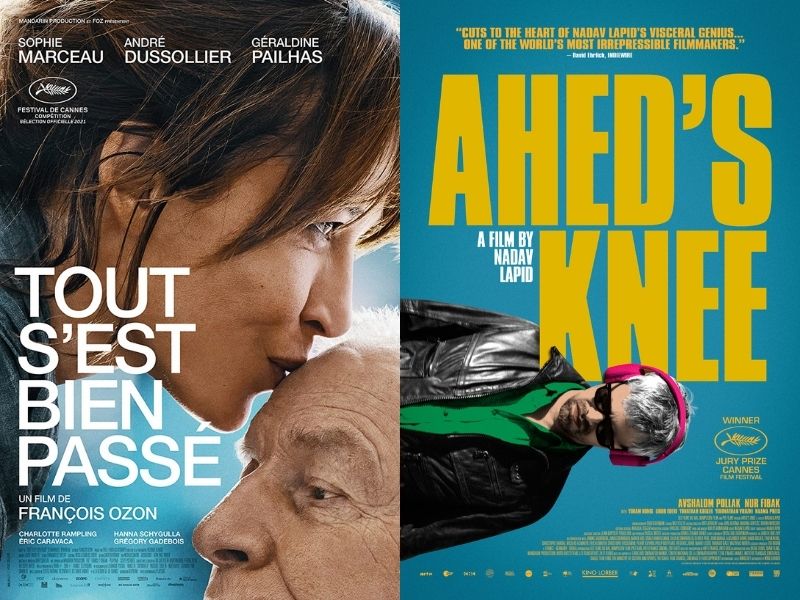 Everything Is Fine and Ahed’s Knee

Francois Ozon, director and script based on the memoir by Emmanuele Bernheim

Any film dramatizing the issue of whether people have the right to die is necessarily going to be classified as a “problem picture.” There may be great humour in such a work or tenderness or high melodrama, but the focus for any viewer will be on how the essential question is handled: does someone have the right to take their own life? That creates a problem for any artist tackling such a story since no one wants to make a narrative that can be reduced to the inevitable query, “is it pro or con?”

It’s the dilemma which faced veteran filmmaker Francois Ozon when he decided to make Everything Went Fine (Tout s’est bien passé). He makes films that are far more complex than problem pictures and this one is also a personal project for him. Everything Went Fine is a tribute to one of his great collaborators, the scriptwriter Emmanuèle Bernheim who, ironically and tragically, has passed away too young from cancer.

While in her early 50s, Emmanuèle Bernheim and her younger sister Pascale were confronted with the kind of awful emergency so many “boomers” have dealt with recently, with one of their parents suffering from a sudden and devastating stroke. That’s how Ozon opens his film, with Emmanuèle, played by Sophie Marceau, less glamorous than in her youth but still effortlessly charismatic, rushing to a Parisian hospital to find out whether her father André will survive his calamitous situation. She’s joined by her sister Pascale, clearly the younger one though they’re now in early middle-age; as the sequences unfold, one sees the loving but real power dynamic between them.

Ozon has chosen to construct the Bernheim family drama in short scenes. Mostly shot in the hospitals and care facilities where André is placed as he recovers from the stroke, the story of his life slowly becomes obvious. It’s only when his wife Claude (a marvellous Charlotte Rampling) is ushered in to see him that it becomes clear to the viewer that she is very sick (with Parkinson’s) and that they have a cold, distant marriage. The more important and complex relationship is clearly between Emmanuèle and André. In short, sometimes abrasive, sequences, Ozon etches it in: they love each other, as she puts it, “as friends might,” but it’s been very difficult for them to be a father and daughter to each other.

Then, André, angry and humiliated by his diminished capacity after the stroke, ups the ante by deciding to end it all, asking Emmanuèle to help him. Ozon lets the intimate situation play out, with the daughter desperately wanting to keep her father alive and the old man, stubborn and willful, demanding to get his way. Slowly, we find out more about André—that he’s Jewish and gay and a wealthy factory owner who is now a major art collector. His difficult, ailing wife is a renowned sculptress; Pascale runs a classical music festival—there’s chamber music by Schubert, Beethoven and Brahms beautifully accompanying the emotional interplay in the film—and Emmanuèle is, of course, a writer whose longtime partner, Serge, is a film curator and editor. (All of this is actually true although Ozon has cast the parts with actors.)

Everything Went Fine (Tout s’est bien passé) is clearly not a typical problem film. It’s a drama based on the real lives of fascinating, complex individuals who actually had to deal with whether someone like André will get to die in his own way. At one point, the question is asked: what do people do if they aren’t wealthy and have the option to go to Switzerland, where the right to die is legal? “They wait to die,” is Emmanuèle’s reply. It’s true: the film is a snapshot of how the rich even out-do the poor when it comes to death.

Francois Ozon has made a tough film, one with little sentimentality about a family in crisis. It reminds me of the best of Truffaut, how in films like Les quatre cent coups (The 400 Blows) or Jules and Jim, the matters of life and death and friendship are dealt with in a matter-of-fact style. Everything Went Fine (Tout s’est bien passé) is a film about life and death—not about a problem.

At 47, which he’ll be in a week, Nadav Lapid is an aging enfant terrible, playing a difficult game with his career. As he did with Synonyms (2019), his Berlinale Golden Bear Award winner, Lapid has made the tough abrasive Ahed’s Knee, another screed against his native country, Israel. Thanks to COVID, Lapid’s film already did the festival circuit last year and was the co-winner of Cannes’ prestigious Jury Prize (along with the acclaimed Memoria by Apichatpong Weerasethakul).

So long as he keeps winning big awards, Lapid can continue to make exceedingly tough films about Israel but if he should ever lose the festival crowd, the director may find it hard to continue on his career path. That’s speculation for another day, I suppose, though it was interesting to see the great Iranian director Abbas Kiarostami unmoored towards the end of his life, making experimental art films and installations instead of feature films after he stopped winning festival prizes.

Ahed’s Knee takes an anecdote from a director’s life and blows it up into a drama. It resembles Fellini’s 8½ in that a crisis by someone creative can become something far more than a depiction of an individual’s plight. Of course, Y, the “man with no name, only a letter,” director played with anger and dispatch by Avshalom Pollak is, like Mastroianni’s Guido in Fellini’s auteurist epic, someone who is more—or less–than a man: he’s a symbol. For most of the film, Y is that familiar male trope: the quietly blazing figure, gazing at a set of situations that upset his sensibility and that of the audience. We’re waiting for him to explode—or, at any rate, to do something meaningful. (Perhaps it’s the genius of Fellini that he has Guido do nothing creative—stopping his film’s production while letting the game of life continue).

Y has been flown into one of the few Israeli frontiers, the Arava Valley desert, where a screening of one of his films has been set up. Soon after he arrives, Y meets the deputy director of the Ministry of Culture’s library department—and you know with a title like that, the poor person is going to be derided—and is surprised to discover that the government’s functionary, Yahalom, is young, attractive and a lover of his films. Yahalom gives Y some room to seethe as she leaves him to rest, but he gets further enraged by an ignorant farmer who drives him to the film screening filled with the usual vulgarians who attend such pre-party affairs. As the screening begins, Lapid brings us to the heart of the matter: the aggressive authoritarian Israeli government.

As they walk along the desert underneath a starry sky, Yahalom asks Y to sign a waiver indicating that his film and public address will be about proper Jewish and Israeli themes—the Holocaust, love, family matters, etc. The film has been leading up to this: the confrontation between the soulful, angry, talented director and the naïve, pretty, official member of the government. Some might call his verbal attack on her, which starts with a terrifying story of toxic masculinity at an all-male barracks during the war against Lebanon (and Syria), and concludes with a denunciation of censorship and Israel’s Cultural Department, to be misogynistic and abusive. Lapid does have the good sense to show that Yahalom is crying thanks to the anger directed at her, though she has also admitted by then that Y is right about their country’s evil ways.

In the concluding section of the film, the drama around Y, Yahalom and Yahalom’s younger sister is played out in ways that allow Ahed’s Knee to end ambiguously. But the anger that pervades the film is what is inescapable in Lapid’s festival winner.

Lapid has named the film Ahed’s Knee in honour of Ahed Tamimi, a young Palestinian activist, who served nearly a year in jail before her 18th birthday for slapping an Israeli soldier after her cousin was shot in the head by a rubber bullet. The Deputy Speaker in Israel’s parliament, the Knesset, actually said that Ahed should have been shot in the knee, putting her under a lifetime house arrest. There’s no doubt that Nadav Lapid feels a lot of anger about current Israeli politics and that his emotions are felt by many around the world.

Does Ahed’s Knee work as a film? Quite frankly, I’m not sure. I’ve never loved diatribes, not even in documentaries, and far less in dramas. For some potential audience goers, this film might prove to be an eye-opener. Others, including many attending festivals, will simply applaud Lapid and not even question if the film works as a drama. Still others might hate it—and they will likely never see it. Should an open-minded Canadian see Ahed’s Knee? Yes, provided they’re prepared for an emotional assault, less than well-reasoned arguments, but with many bravura bits of cinema.