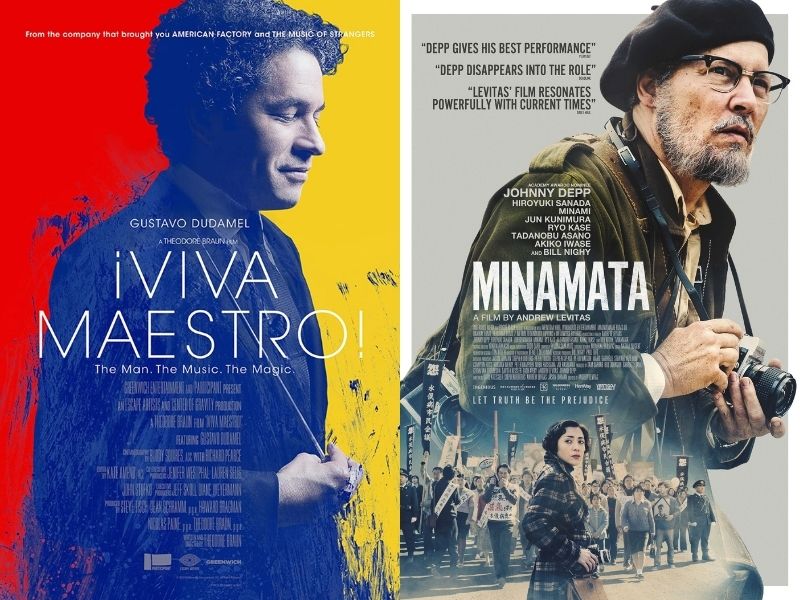 Artists can be Heroes

I don’t usually start off a review with a quote but here’s one that’s hard to ignore. It’s from Anthony Tommasini, the recently retired and beloved critic in the NYTimes: “A terrifically exciting conductor, Gustavo Dudamel has accomplished so much in his blazing career that it’s easy to forget he’s only 40.”

Some call him the Mick Jagger of classical music. Gustavo Dudamel is young, sexy and joyful, like Jagger was back in the boomer years. The Venezuelan conductor of the Los Angeles Philharmonic, the Opera National de Paris and his own country’s iconic Simon Bolivar Symphony Orchestra–handsome, fit and stylish–Dudamel is a beloved figure throughout the world. Known for his exuberance and musicality, his performances are renowned for their dynamism and nearly overpowering sonic splendour.

In Viva Maestro!, Ted Braun’s celebratory doc, the audience will be enmeshed in the glory that is Dudamel: his accessible demeanour, passion and charisma is on display constantly. If there’s a personal Dudamel, we never know about it; in fact, we rarely see his second wife, Maria, or Martin, his son from his first marriage. The great conductor’s private side is mainly revealed through his love and respect for José Antonio Abreu, the founder of the phenomenally successful Simon Bolivar Symphony Orchestra and creator of the beloved El Sistema. Dudamel has inherited both the Bolivar symphony and El Sistema, conferring on him global respect for a teaching method that inspires children wherever it’s instituted in the world.

Braun’s upbeat film only has to negotiate one tough patch, the on-going political chaos in Venezeula. It took Dudamel many years to manifest a formal complaint against the corrupt and economically devastating regime of President Maduro, and that was a written piece in the NYTimes. Wanting to keep El Sistema alive in his country, Dudamel is careful to criticize a dictator whom he might want to oppose in a direct manner. Dudamel’s dedication to music and art and education as the most important human values is made clear in the film, though it’s fair to question whether the most famous Venezuelan could do more for his country than he is doing.

What Dudamel does—and wonderfully well—is conduct. A trained violinist, Dudamel reads scores effortlessly and was personally taught by Abreu from his teens. He’s musically precise but what marks him as a star is his ability to communicate. “More like champagne, less like moonshine,” is what he declaims to a choir singing “Ode to Joy” in the film. And they laugh—and get it.

The most impressive parts of the film are when he implores his orchestra—and there are several—to perform to his high expectations. The film takes him and the Simon Bolivar on a tour of Berlin, Mexico City, Hamburg and Santiago, Chile, beautiful locations with imaginatively designed concert halls. Throughout, the globally beloved classics of Beethoven, Tchaikovsky, Mahler, Shostakovich, and Mexican composer Arturo Márquez are performed.

Before he was 35, Dudamel was already lovingly parodied by Gael Garcia Bernal in the wonderful TV series Mozart in the Jungle. What else will happen for el Maestro in the future? Let’s hope he becomes President of Venezuela and turns it into a totally musical republic, with operas in the parks and string quartets on the streetcars. Maybe it can make money that way instead of through oil. In any case, for those who love classical music and art, Viva Maestro! is a film for you.

It’s one of the finest photographs ever made and certainly one of the most famous in aesthetic circles. W. Eugene Smith’s Tomoko in her Bath shows a mother cradling her massively deformed daughter in her arms in a tub. Shot in expressive black and white by a master of the form, the image is one of tenderness and terror as a mother’s love for her child overcomes any consideration of the girl’s painfully misshapen body. The image resembles that of the Madonna and Child paintings of the Renaissance era; like those gorgeous works, the configuration and intensity is almost impossibly emotional. People have burst into tears gazing at Smith’s photo of a victim of Minimata disease and you would be a hard case not to know why. The more I see it, the more emotionally engaged I feel with the photo and the story behind it.

The director Andrew Levitas for whom the film Minamata is a passion project has constructed an odd, politically engaged film about environmental pollution, beatniks, photography and a love of Japan. Minamata disease is all too real and had already started to be recognized by the Japanese government even before Smith and his Japanese American partner (and latterly wife) Aileen went to Japan in 1971. Caused by mercury poisoning, Minamata is a neurological disease that can cause insanity, paralysis, comas and death. The corporation and main employer in the Kumamoto Prefecture was Chisso—and their own research had already warned them of the disastrous effects of mercury from their plant being dumped into the waters surrounding the area decades before the people in Japan found out the truth.

Ok—there’s a great photo and a deadly disease. What about a film story? Levitas has built up a tale about an aging, great photographer whose life is ready for a comeback and is seduced into an environmental and human rights cause. That’s W. Eugene Smith, more or less: a brilliant photo essayist whose Country Doctor Life Magazine piece in 1948 is often cited as a humanist masterpiece as is his year-long study of mid- ‘50s Pittsburgh and the very personal and expressive Jazz Loft series, which captured a key period in the maturation of the music. But by 1971, Smith was going nowhere, drinking a lot and angering his former employers.

Johnny Depp, whose career needs a comeback as much now as Smith’s did then, is the right person to play the aging but still hip and almost sexy photographer. Minami is persuasive as Aileen, the translator who gets him engaged with the Minamata cause, making their move to Japan take place. Director Levitas uses a mainly Japanese cast—especially terrific is Akiko Iwase, playing activist Masako Matsumara–to dramatize what Smith encounters: a small island filled with victims and those who are employed by the Chisso Corporation and don’t want to see their main employer leave their remote region of Japan.

Minamata is filled with characters and incidents that should keep you engaged. The environmental theme is played out with clarity as is the Minamata disease. And Depp is persuasive as Smith. But the film feels overly melodramatic and old fashioned. We’re never totally involved with Smith’s struggles or those in the Minamata resistance. Levitas has made a film of great intensions but the result isn’t top rate. Worth seeing, of course, but may I recommend Smith’s photos, whether you see the film or not?