Film Review: Till & Ticket to Paradise 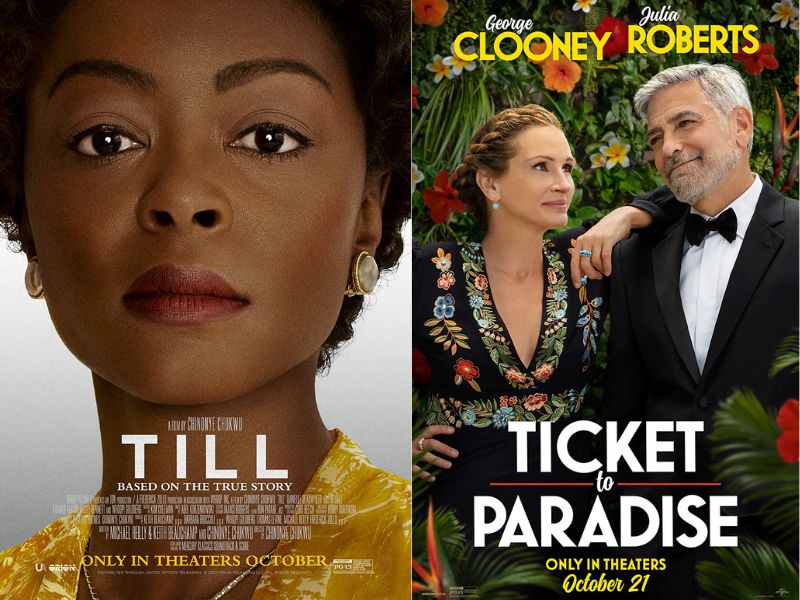 What’s Love Got to Do With It?

Till & Ticket to Paradise

How do you deal with important images and stories that are meant to be upsetting, even obscene? For many, looking at shocking shots is a deal breaker. I have relatives who work on fixing terrible situations in the world but refuse to look or hear dramatic material that is designed to focus their attention on very unpleasant matters. They feel that they “get it,” and don’t need to see brutal images or hear horrifying tales before insisting on change. But that’s not necessarily true for the majority of the population. Here’s the essential question: what do we need to see or hear or read before we rise to action?

This issue is at the heart of the matter in the new feature film Till, an intense and sincere recounting of the tragic events that overtook the Till family in the summer of 1955. Emmett “Bo” Till, an exuberant 14-year-old Chicago boy, went to spend time with relatives in rural Mississippi, a place where racism was just as terrifying as it had been since the end of the Civil War. Nigerian-American director Chinonye Chukwu makes it clear that Chicago was also a prejudiced city, but black people didn’t have to flagellate in front of white folks, nor did they have to fear a lynching if they acted incorrectly. Mamie Till tried to tell her son that life was different in Mississippi, but he didn’t understand; he was, after all, just a boy. When Emmett talked to a pretty white woman at a convenience shop, he whistled at her and told her she was beautiful. For that indiscretion, he paid the ultimate price.

The story of Emmett Till, which was the equivalent of the George Floyd killing and the Rodney King beating in terms of awakening white America to intolerable racism existing in its midst, is predicated on the bravery of Mamie, the victim’s mother, who insisted on showing the face of someone brutalized by truly hateful whites. Instead of a closed coffin, Mamie chose to show the world through Ebony magazine’s photographer’s images of her dead son what hatred is all about. A beautiful boy had been beaten to a pulp, his teeth removed, and every part of his body invaded. The images are shocking to this day. It’s hard to believe that someone could hate so much but the evidence is clear: whites could do that back then and the whole BLM movement is based on that reality; it can happen now, tomorrow, and next week.

The makers of Till, including Whoopi Goldberg, who plays Emmett’s grandmother and was a producer of the film and Barbara Broccoli, another exec prod, who has made a fortune with James Bond films, must be proud of tackling this difficult story but probably worked with Chukwu to make a film that an audience could see.

Chukwu’s film refuses to show us the terrifying final day of Emmett’s life. Instead, it concentrates on his mother, Mamie, who despite of her love for her son, insists on showing what white racists did to Emmett Till. So, yes, this film does show us Emmett’s body after he’d been killed. You couldn’t tell the story without it. Chukwu and her producers show you images of Emmett’s body slowly, almost reverentially, allowing an audience member to look at the poor lad’s face, or not.

After Mamie deals, as well as she can, with her son’s death, the film concentrates on two things: her growing political awareness and the trial of Emmett’s murderers, who, of course, get off free. Mamie’s courage in facing the murderers and a white majority population who are totally against her, is shown full force. So is her conversion into a black activist.

Chinonye Chukwu has done a fine job evoking Chicago and rural Mississippi in the Fifties. The music, the clothes, the images are all excellent. The performances are persuasive, particularly

Danielle Deadwyler as Mamie, Frankie Faison as her dad, Whoopi Goldberg as Mamie’s mother and, of course, Jalyn Hill as Emmett. This is a difficult film that deserves to have been made and kudos to all, who have created a worthwhile and exceedingly watchable endeavour.

The romantic comedy, or romcom as we all call them, has been a go-to genre for theatre and cinema for such a long time that it’s hard to imagine it being reinvented, especially in a commercial Hollywood movie. And the producers of the new romcom Ticket to Paradise, who include its stars George Clooney and Julia Roberts, would hardly claim revolutionary status for their intermittently funny piece about love and marriage set in a folkloric Bali, which was actually shot in Australia. But the film does do something quite different by not starring attractive young leads in the main roles.

Ticket to Paradise features the young and attractive Kaitlyn Dever and Maxime Bouttier but quite frankly, you will go to see Ticket to Paradise because it stars Julia Roberts and George Clooney. Do the math: Clooney is 61 and Roberts will turn 55 in late October. In the Oscar winning romcom The Philadelphia Story (1940), Katharine Hepburn was 33, Jimmy Stewart 32 and Cary Grant 36—and they were considered to be mature in golden age Hollywood.

Ticket to Paradise is a Zoomer romcom made for our audience, which is still stylish and sexy, and older. Nobody over 40 starred in a romcom back when the genre was at its early peak, and quite frankly, the idea of people in their mid 50s and older having love lives was considered anathema back then. Now millions around the globe accept it, which is proven by Ticket to Paradise’s worldwide success before its North American release: it’s made over $72 million, more than its budget, already.

Fine, you’re thinking to yourself, but should I see the movie? To be quite honest, while it could be better—and we’ll get into that—Ticket to Paradise is romantic, sentimental, and occasionally quite funny. It’s a romcom that delivers—and isn’t that what it’s all about?

The film’s plot is simple yet compelling. When Lily Cotton (Kaitlyn Dever) graduates from law school, she and her best friend Wren (Billie Lourde) go to Bali on vacation, where (unsurprisingly) romance ensues. Little over a month later, Lily informs her beloved but divorced parents David (George Clooney) and Georgia (Julia Roberts) that she is going to marry Gede (Maxime Bouttier), a Balinese seaweed farmer and not pursue being a lawyer. Reacting with fervour, Lily’s squabbling parents form an unholy alliance to split up the young lovers before they marry.

As they work together to unsettle Lily’s upcoming marriage, Clooney’s arrogant but charming David and Robert’s witty, sophisticated Georgia begin to fall in love again. While Lily remains oblivious to her parents’ manipulations, Gede figures it out and confronts David several times to no good effect. As if there isn’t enough plot, director-writer Ol Parker adds more by including Georgia’s handsome airplane pilot boyfriend Paul into the story, who arrives and proposes marriage. If you were to stop the film at the 75% mark, we’d be wondering: will Georgia accept Paul, or will she realise that David is the only one? And, most importantly, will Lily marry Gede?

Understandably, given my years in the film critics union, I can’t reveal the ending. What’s more important, quite frankly, is whether the film is worthy of your viewing time.

It all comes down to the chemistry between Julia Roberts and George Clooney, You can’t gauge combustibility: it’s either there or it isn’t. Since Oceans Eleven, and in three other films since, the two have been effervescent. Their confidence is extraordinary, their timing impeccable. The two are wonderfully funny together.

I went to this romcom with my long-time partner. We laughed at the sparring and some occasional (though obviously set up) comedy pieces. It’s hard not to like Roberts and Clooney and the script is good enough not to betray them.

As for the rest, how many times can you say “meh”? Maxime Bouttier’s Gede and Lucas Bravo’s Paul have little to do and the same’s the case with Billie Lourde’s Wren, who would have been terrific if the part had been better written. The wonderful Kaitlyn Dever, who was brilliant in Dopesick, isn’t given enough comic lines; she was cast to greater effect in the very funny Olivia Wilde feature Booksmart (as was Lourde in a smaller role).

Despite some misgivings, I recommend Ticket to Paradise to our Zoomer crowd. It is romantic and funny. I wish it was better—but it’s worth your time.