Film Review: The Banshees of Inisherin & Decision to Leave 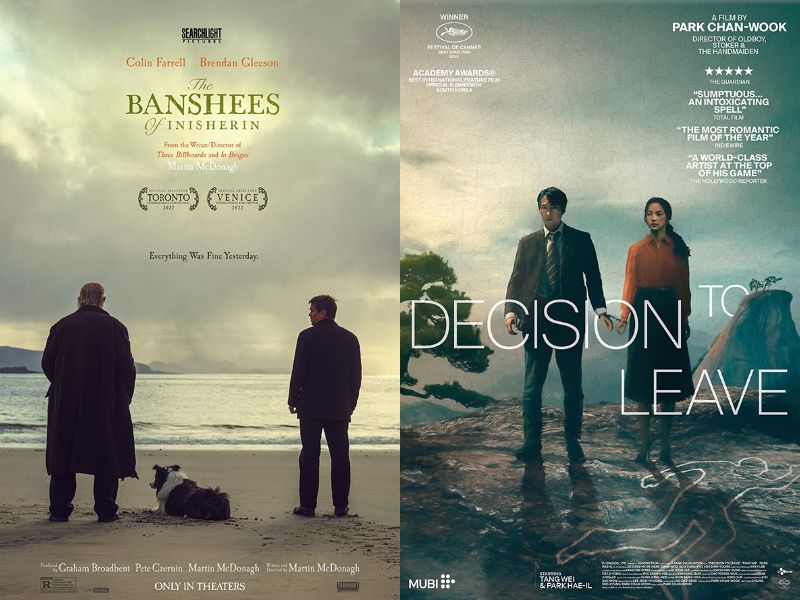 Breaking up is Hard to Do

The Banshees of Inisherin & Decision to Leave reviewed

The Banshees of Inisherin

There are no banshees on the Irish island of Inisherin, which in any case, doesn’t exist. That’s par for the course in the work of Martin McDonogh, the British-Irish playwright and filmmaker who is the creator of some of the darkest comedies of the past couple of decades. He goes for inner truths and the facts be damned. Filmgoers who recall the multi-award winning murderously sardonic Three Billboards Outside Ebbing, Missouri and the hit man comedy In Bruges won’t be surprised to discover that his new work mixes humour and violence with equal aplomb. Adding to the delight for afficionados of McDonogh’s oeuvre is the pairing once again of Colin Farrell and Brendan Gleeson who were so brilliant together in his cult hit In Bruges.

There’s much to recommend in The Banshees of Inisherin, although there’s a basic puzzlement to it, which has to be discussed as well. Set in 1923, at the end of Irish civil war, it’s the tale of a dissolution of a great friendship between local farmer Padraic (Farrell) and the gifted folk musician Colm (Gleeson). One day, Colm abruptly decides to stop speaking to Padraic, though there had been no fight to precipitate it. Understandably, Padraic is upset and mystified, especially as their grand association is known throughout the island, making him look bad in front of everyone they know. At first, Colm offers no explanation but eventually he tells Padraic that he’s too dull and that, for him, music must take precedence from now on.

It’s an argument in favour of art over pleasing but uninvolving friendships, further reinforced by the knowledge that Padraic is well meaning but, indeed, quite dim. But this wouldn’t be a McDonogh film (or play) if events didn’t venture into darker terrain. Angry at Padraic’s determination to continue their friendship, Colm warns that he’ll cut off his fingers one by one if he isn’t left alone. Of course, Padraic ignores the threat and duly receives one of Colm’s fingers. Despite the intervention of Padraic’s intelligent and likeable sister Siobhan, the situation escalates, becoming more and more violent.

Here’s my problem with the film—and, indeed, with much of McDonogh’s work. His characters are sharply drawn, and the dialogue is often brilliant. He can be very funny, turning humour in on itself when the moment is right. But why does his work have to be so violent? In Three Billboards, for example, a suicide and a fire bombing of a police station seem to be inserted simply to ramp up the action. Here, we’re left to figure out Colm’s motivation because if it was for art, how he can play the violin without fingers?

You can have fun with Colm’s merciless solution to dissolving the friendship: is he cutting off his fingers to spite himself? Or is he giving the finger to the situation? We know that there’s a civil war taking place in mainland Ireland while this local dispute is occurring. Are we to read the odd destruction of a comradeship as a metaphor for the crazy war between the Irish who had just recently achieved a great victory, finally making most of the island independent of the U.K? Or should it be looked at as an equivalent of the end of a love affair, where couples go from spending every day together to never speaking again?

McDonogh is a deep thinker, and though he prefers film, remains theatrical. Those who have seen such plays as Deadmen and The Plillowman know how masterful he is in that form. He is brilliant when creating scenes and revealing conversations. The Banshees of Inisherin, which was shot on the Aran islands, the setting for two of his acclaimed theatre pieces, brilliantly evokes the atmosphere of a small, secluded community filled in equal doses with ancient arguments and loyalty: grand gestures of love and a fearsome love of fighting.

He has cast The Banshees superbly. Chemistry is hard to define but somehow Farrell and Gleeson have a way of talking with each other—or not talking—which is exquisite. It seems as if they’ve known each other for ages, though in fact they’re actors who only work together in a manner that appears effortless. McDonogh employs them in very different roles than In Bruges but the two remain marvellous together, giving each other the space to find the rhythm to make their performances mesh seamlessly. A casting coup was bringing in Kerry Condon, who had performed brilliantly in two of McDonogh’s early theatrical successes, The Lieutenant of Inishmore and The Cripple of Inishmaan, and has returned to play Siobhan wonderfully well in the film.

The Banshees of Inisherin is a bafflingly brilliant work. It may not be totally comprehensible but there’s much to admire in the film. And surely that’s enough.

The winner as best director at the 2022 Cannes Film Festival, Park Chan-wook has created a stylish piece of cinema with Decision to Leave. It’s rare to favourably compare a film to one made by Hitchcock but Park was so inspired by the auteur’s Vertigo that he decided to make filmmaking his career, so a vigorous nod towards the legendary British director seems more than appropriate.

Park’s film evokes the dark passionate tone of Vertigo, replicating Hitchcock’s melding of a tough detective story with a tale of overwhelming romantic tendencies to create a new masterpiece, one that will work for this generation of cineastes. In Hitchcock’s Vertigo, a troubled detective played by James Stewart fell in love with a mysterious figure performed by Kim Novak, a problematic ‘50s Hollywood beauty whose cool, often tragic, demeanour worked against her glamorous press-built identity as the sexy rival to Marilyn Monroe. As Stewart’s detective Scotty follows the Novak character (Judy at some points and Madeline at others), through San Francisco, he becomes immersed in her sad life, or at least his imagination of what that might be. His pursuit and their relationship led to a tragic conclusion, fully in keeping with the narrative.

Park Chan-wook’s film centres on the brilliant Busan detective Hae-jun (Park Hae-il), whose pleasant life with his wife and amiable fellow inspectors is turned topsy-turvy when he meets the gorgeous Seo-rae (Tang Wei), the Chinese widow of a wealthy older Korean, who has mysteriously died, plunging from a mountain in an apparent accident. Hae-jun finds himself falling in love with her, ignoring clues that would make her the clear choice as her husband’s murderer. Both have to deal with the Korean prejudice against Chinese, which makes the enigmatic Seo-rae the stereotypical murderer of her husband, which confuses Hae-jun’s thought process and investigation.

Like Vertigo, the detective—in this case, Hae-jun–becomes involved with the woman he is pursuing. Both films are about surveillance, with the voyeur slowly, implacably, losing his objectivity. Is it because neither subject nor situation is comprehensible? A detective wants logic. Romance defies it. In both films, the woman is impossible to understand for the logical detective.

Park invites us into the life of Detective Hae-Jun, a likeably unremarkable person except for one thing, his ability to solve crimes. When it comes to homicide, the detective emerges from mediocrity and becomes the best. His crime solving rate is staggeringly high but he also has held onto files of homicides he hasn’t solved. Hae-jun wants to be successful in all of his cases. Nothing should be beyond him.

A good deal of the film is taken up with modern surveillance techniques. This is the age of cell phones, social media and endless variations of digitized images, which can be transported worldwide on computers and screens. Hae-jun follows Seo-rae on devices, which only makes him more interested in meeting her in person. He buys her lunches constantly, which doesn’t interest her: she barely eats, and when she does, it’s often junk food. As Hae-jun continues his pursuit of Seo-rae, the more she becomes an image and less of a person.

As in Vertigo, the detective falls for the woman he’s observing, but she remains elusive. Though Hae-jun realizes that he can solve the case, he lets Seo-rae go, even explaining his process to her. That should be the end of it, but just as in Hitchcock’s oeuvre, the past is merely the prologue for the true denouement. The two meet again, a year later, in the small-town Hae-jun has moved to, after giving up his job, following his inability to solve the murder case. Seo-rae Is married again to a younger man, who is equally rich. All too soon, he dies violently, in their swimming pool.

An enraged but conflicted Hae-jun has to pursue Seo-rae again with the knowledge that she must be involved in her second husband’s death. As he works on the case, Hae-jun’s wife becomes angry, as she knows that he is entranced by Seo-rae, and leaves him. Exposed as a flawed detective and bad husband—two things he doesn’t want to be—Hae-jun works harder than ever to solve the case. But emotions—and Seo-rae–overtake the investigation before anything can be solved.

Park Chan-wook has made a beautiful film, one that is crafted to show how social media has made the pursuit of truth nearly impossible. As for love and commitment, Park is ambiguous, as are many of us. The imagery in Park’s film is darkly romantic, revealing the beauty of the city and the venues of the wealthy: glamourous dining and living rooms, brilliantly lit swimming pools, elaborate bedrooms. Decision to Leave is a wonderfully well-made film, with a rich plot and characters worthy of exploration. It’s up for an Oscar for Best Foreign language film. Who knows? It could win yet another award for the Korean film community.