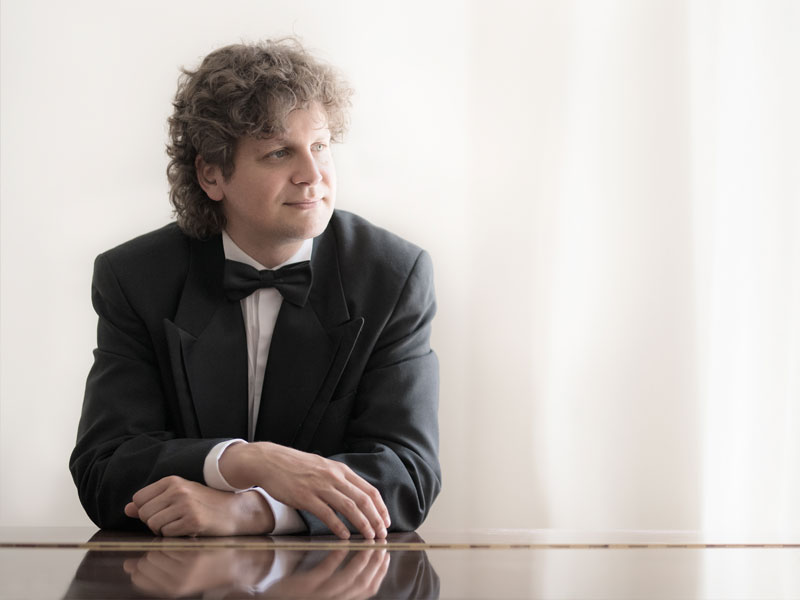 Daniel Vnukowski has enjoyed international recognition as a concert pianist, in a formidable career that has spanned five continents. These have included large-scale concerts for crowds in the thousands and outreach recitals for youth in remote communities throughout Canada, as a founder of the “Piano Six – New Generation” program. He is also the founder and Artistic Director of the “Collingwood Summer Music Festival.”

Growing up as a young boy in Niagara Falls, ON, he came across a grand piano made of transparent glass in a store at the age of 4 and begged his parents to start piano lessons. Soon afterwards, he wrote his first compositions for voice and piano. At the age of six, his parents gifted him with a microphone that became his most cherished possession throughout youth, allowing him to record his music and release cassette tapes on a homemade record label.

The music of long-forgotten, interwar-period Jewish composers has occupied a special place in Daniel’s repertoire, resulting in several highly-acclaimed CDs of piano music as well as a sold-out Carnegie Hall at Weill Hall recital debut that included Karol Rathaus’ Piano Sonata No. 3 – a work that had not been heard in New York since 1929. For these performances, Daniel was called “a pianist to watch” by the New York Classical Review; “a dashing pianist” by the Sunday Times; and recognized by the American Record Guide as “played to the hilt.”

During the Covid-19 crisis, Vnukowski’s virtual live streaming project from home made waves internationally, enjoyed by over half a million viewers. The livestreams were endorsed by Fazioli Pianoforte and featured on NPR Radio, Classical FM, Ludwig Van Toronto and BBC Music Magazine playlists. Daniel has also been a featured speaker at Moses Znaimer’s Ideacity and at the Georgian Triangle Lifelong Learning Institute in Collingwood.

He was trained at the Lake Como International Piano Academy in Italy where he worked with distinguished artists such as Dmitri Bashkirov, Menahem Pressler, Claude Frank, Fou Ts’ong, John Perry and William Grant Naboré and at the Peabody Institute of Baltimore under the guidance of Leon Fleisher.

Note: Vnukowski is an anglicized version of the original Polish name Wnukowski.