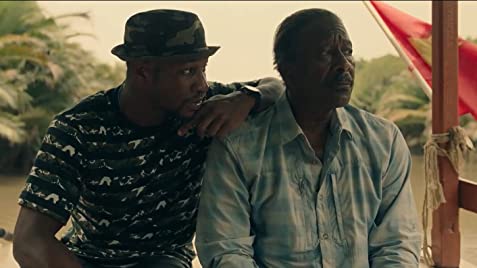 Broadcast and produced by Netflix

Spike Lee’s Da 5 Bloods is a fresh take on how four Black Vietnam War veterans respond to being back “in country” after more than 50 years. It couldn’t have come out at a better time. As North America and Europe reels over continuing protests over police brutality, the legacy of slavery and the imperialist path pursued by much of Western Europe and the United States for centuries, Lee has released a film on Netfix, which dramatizes the legacy a quartet of Blacks who served in Vietnam are still enduring after all this time.

Though Da 5 Bloods dramatizes a mysterious combat death, the discovery for one of the bloods of a Black Vietnamese daughter and a violent relationship between a father and son, make no mistake about it. Spike Lee has made a film about Black and American politics back in the Sixties and today. He starts the film with a series of dramatic statements by such legendary Black activists as Malcolm X, Martin Luther King, Jr., the Black Panthers’ Bobby Seale and Muhammad Ali attacking the racist system in Sixties America as a hugely disproportionate number of Blacks (32% even though they amounted to 11% of the population) fought in Vietnam.

After this montage of documentary footage, including the infamous photographic images of a Viet Cong member being shot—at the point of impact—by a South Vietnamese soldier, a Buddhist monk setting himself on fire to protest the war and a tiny Vietnamese girl running naked with other children after having been hit by napalm, Lee sets up his drama. The four bloods returning to ‘Nam, all of whom served in the same troop are Paul (Delroy Lindo), a big eloquent tragic figure still suffering from PTSD (post-traumatic stress disorder), the rich and idealistic Eddie (Norm Lewis), the cooler and better adjusted Otis (Clarke Peters) and the nostalgic Melvin (Isiah Whitlock, Jr.), who is back to enjoy his friends.

The four bloods are in Vietnam ostensibly to find and bring back to Arlington Cemetery their fallen leader, Stormin’ Norman (Chadwick Boseman). Soon, it becomes apparent that there’s a second reason: the five bloods have buried gold bricks intended to pay Vietnamese for their service to the U.S. but which was shot down with them when their helicopter was hit and crashed in the mountains. They want to recover the gold, too.

Joining the contemporary four bloods is a fifth—Paul’s son David, who says he wants a cut of the money but is mainly there to help his charismatic but disturbed father. As Lee’s film escalates, Da 5 Bloods becomes a thriller after the gold is found as well as the remains of Norman, and it turns out that others want those yellow bricks, too. Other writers have already commented that the second half of Da 5 Bloods echoes John Huston’s Oscar winning adaptation of B. Traven’s anti-capitalist Treasure of the Sierra Madre. It’s one of my favourite films and Lee couldn’t have made a better homage to a classic condemnation of what gold (and stocks and petro-dollars) can do to destroy someone’s integrity.

Orchestrated and nicely edited to include visceral action scenes, Da 5 Bloods satisfies what a movie goer would like to see on Saturday night but it also raises larger issues about racism, warfare and colonialism. Lee has put together a great team of actors but the kudos (and, I think Oscar nomination) will go to Delroy Lindo, who is dominate and persuasive as a massively conflicted father, soldier and friend.

Spike Lee has made a fictional film in which Black Lives Matter directly benefits from ill-gotten gold. In reality, Lee and Netflix have created and financed a film that says much about what happened to America a half-century ago while projecting a potentially positive—and radical–future. Let’s hope that Lee is right.