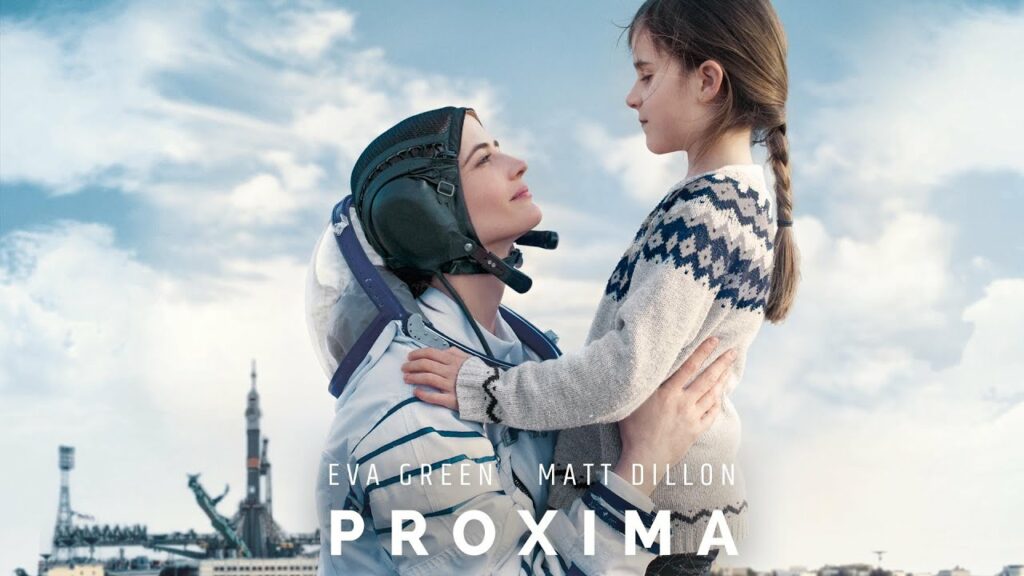 A story of how a mother’s pursuit of her dream to be an astronaut affects her daughter, Proxima is a film less about space travel and more in tune with emotions. That’s not to say that Sarah, the soon-to-be astronaut, doesn’t have to deal with physical and mechanical training. The film shows the training program for those embarking on a space voyage with documentary precision, much aided through the use of authentic locations at the European Space Agency (ESA) facilities in Cologne, Star City in Russia and a final launching site in Kazakhstan (rather different from the country in Borat). We see her using machines and exercises to hone her body but that’s not the end of her tasks. She has to deal with her daughter and the sexism in the three person crew, headed up Mike (Matt Dillon), a lumbering macho American, who doesn’t think she’s up for the task.

Alice Winocour’s film concentrates on the psychological ride Sarah is taking, and not so much on the anticipated journey into space. Eva Green, who is known for being a Bond girl in Casino Royale and Tim Burton’s bizarre female lead in Dark Shadows and Miss Peregrine’s Home for Peculiar Children, is finally given the chance to act in her native language, French, and as a woman dealing with unique but relatable emotional situations. Zelie Boulant-Lemesle is wonderful playing the eight-year-old Stella (which means “star” in Latin and Greek), who is quite fragile perhaps because of the break-up between her parents, Thomas, a space scientist and Sarah. The most intimate scenes in Proxima play out with the mother and daughter, talking, playing and spending time together. We experience the tenderness of their relationship. Stella is demanding and although Sarah sometimes acts quite parental, for the most part, she goes out of her way, explaining situations to her daughter and figuring out the best way to help her deal with the challenges eight-year-olds encounter: making friends, conquering fears and learning how to communicate with adults. Adding to Stella’s sometimes crippling concerns is a hatred of math, which is making school difficult in France.

Her dad, Thomas, a German scientist, now charged with taking care of Stella for the year Sarah is away on a probe of Mars jokes that Stella can’t be his daughter because he’s excellent at math. It’s one of several scenes where Sarah comes off rather tone deaf to humour since she is spending so much time adjusting to putting herself first for a change. This same dilemma makes her relationship with fellow astronaut Mike so tough; she spends time trying to physically outdo him, which is unfair to both of them. In the end, we see that Mike has got Sarah’s back as a member of the team when authorities question her.

Contributing greatly to Proxima is the score by the great Ryuichi Sakamoto, who has won an Oscar, a Grammy and two Golden Globes for his lushly orchestrated music. Here he is able to convey what Sarah is feeling through his delicate musical touch but is also more than capable of adding to the awe and mystery that Stella experiences when seeing a rocket ship for the first time. It would be remiss not to acknowledge the casting of Lars Eidinger and Sandra Huller as Stella’s father and the psychology mainstay of Sarah during her adjustment to the male dominated environment in the European space program. Sakamoto, Eidinger and Huller fill in the picture of what Sarah and Stella are experiencing in the time leading up to the rocket launch.

If all of this makes it seem that Proxima is about the interior world and not the exterior, that is certainly Winocour’s strategy. Although the director makes what she can of the scenes of Sarah becoming an astronaut and asserting herself to her ex-husband and fellow members of her space team, the most resonant parts of the film are about her and Stella. It’s what sets Proxima apart from a run-of-the-mill space film. Some may criticize the filmmaker for not making Sarah’s story more melodramatic by adding novelettish plot devices but it’s the purity of emotions that makes this film so remarkable. It’s a cliché to see this film as feminist and although it is, Proxima is special because a woman writer-director has been allowed to explore the emotions of a female astronaut. Proxima is an exceptionally acted film that deserves to be seen in this time of the pandemic.