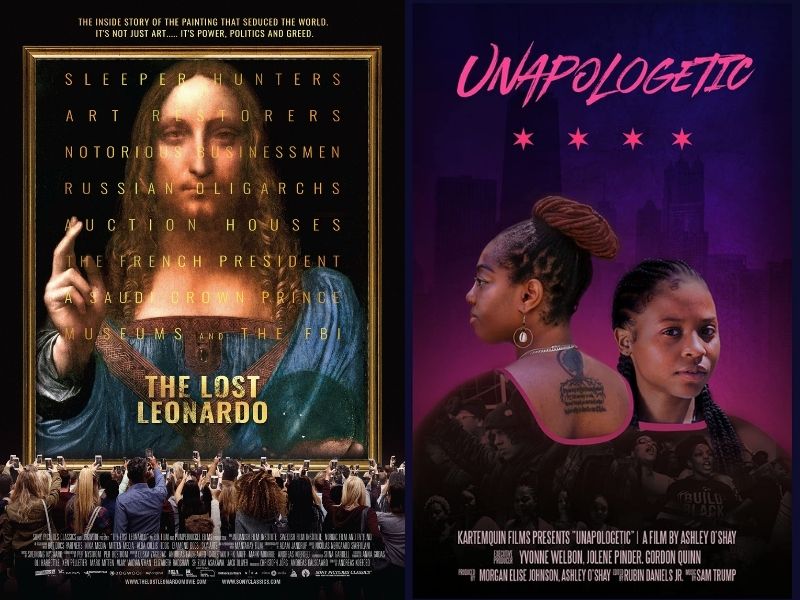 A brace of stunning docs as summer ends
By Marc Glassman

Do you believe in miracles? Could a painting of Jesus by Leonardo da Vinci suddenly appear nearly 500 years after the Renaissance master artist had died? The Lost Leonardo is one of those docs that is absolutely worth seeing because the story is so compelling. Not only is Andreas Dalsgaard’s film well researched, but it also has a pace and rhythm that makes one relish its complex narrative. While not stylistically flashy, the makers of The Lost Leonardo urge viewers to savour the political, economic and artistic ramifications of its crucial tale.

Dalsgaard starts the film in 2005, when Alexander Parish, a self-styled sleeper hunter—someone who looks for unique objects—made a bid of $1,175 with a sympathetic gallerist, Robert Simon, to buy a drastically over painted and degraded version of the Jesus painting Salvator Mundi, which Leonardo is presumed to have painted approximately 500 years earlier (and was copied by his students in the following decades). Parish, Simon and art dealer Warren Adelson felt that they had hit the jackpot, that their painting was the genuine Leonardo original. They hired art restorationist, curator and art professor Diane Dwyer Modestini to work on the painting and she, too, began to believe in its authenticity when she discovered another hand in the pentimento, underneath the top painting. That wouldn’t have happened with a student copying an original work. While continuing her work on it, Mondestini found that Jesus’ lip had been rendered perfectly in a way that was intrinsically Leonardo’s. Convinced, she restored the painting, which has beauty and a real presence to it.

That story would be enough for a good doc, but it’s only Chapter One. The trio, with help from Modestini, had to establish credibility for the painting. While attempting to do that, it was submitted to Dr. Nicholas Penny, soon to be the director of London’s prestigious National Gallery. He, in turn, showed it to experts, who were convinced that it was an authentic Leonardo. After a sensational and controversial launch at the Gallery at the insistence of Leonardo expert and curator Luke Syson, the painting was offered for sale through Sotheby’s. Chapter Two ends ambiguously as it takes years to sell.

In Chapter Three, we meet the rouge Yves Bouvier, a Swiss financier, who eventually buys the painting for $83 million and flips it to Russian oligarch Dmitry Rybolovlev for $127.5 million. All would have been fine, but Bouvier’s slick and dishonourable methods were exposed in an article, which made Rybolovlev furious. It’s here that The Lost Leonardo moves from being a documentary about art and moves into global capitalism. Bouvier was one of the first people to discover a legal loophole: objects can be kept in freeports, in-between borders with no taxes being charged by any government. There are billions of dollars’ worth of precious objects sitting in lockers in freeports around the world. Among them are some of the greatest paintings in the world. They’re out of sight, reduced to being mere commodities.

But let’s move to Chapter Four in which Rybolovlev decides to sell all the art he bought from Bouvier to get back the one billion(!) commission that he had overpaid. Paintings by Klee, Magritte, Picasso and many other masterpieces, all with clear provenances, were sold through Christie’s. But there was the big one, the Salvator Mundi. How to sell that? Christie embarked on a world-wide campaign that didn’t focus on the art but on the notoriety of the work and the splendid intent of the painting. They created a video that never showed the painting, only the looks of awe that spectators—including Leonardo DiCaprio—showed when seeing it. When it went to auction, the question had become whether the formerly lost Leonardo, which some art professionals still don’t believe is truly by the master, would sell for more than the previously held figure for a purchase, $300 million for a de Kooning. Of course, it ended up being the most expensive piece of art sold in the world at $450 million.

Chapter Five: who bought the painting and is it a genuine Leonardo? Supposedly, the buyer was Badr bin Abdullah Al Saud, the minister of culture in Saudi Arabia. Everyone knows that the real purchaser is the notorious MBS, Mohammed bin Salman, the first Deputy Prime Minister of Saudi Arabia, and the de facto ruler of the country since his father let him run it 2017. MBS has been denounced by many for his suppression of every sort of activist in his country. He is personally judged to have been involved in the murder of Washington Post journalist Jamal Khashoggi. MBS is behind the bombings in Yemen and the exacerbated crisis between his country and Qatar. His reason for buying the Salvator Mundi is clear: if displayed at the Louvre outpost in Saudi Arabia, it will increase tourism.

Is the Leonardo Salvator Mundi the real thing? We’ll never know. In fact, until MBS decides to display it, we may still call it the lost Leonardo.

A stirringly confrontational film, Unapologetic earns its title with an early scene where young Blacks interrupt a bunch of privileged Whites eating brunch in an upscale restaurant with fierce words about deadly police violence against their people. The message is clear: we’re grieving over our dead and you’re having a fancy lunch. This is Chicago, a city of massive anger and provocations, where Whites and Blacks barely exist in a racial divide.

In her feature directorial debut for Chicago’s award-winning documentary producers Kartemquin Films, Ashleigh O’Shea follows two women who are like her: young, gifted, Black and dedicated to righting wrongs in a deeply flawed society. Janaé Bonsu is from South Carolina—she visits her family roots during the film—and has come to Chicago to get a Ph.D. on finding safety in the U.S.’ current political system. Ambrell “Bella Bahhs” Gambrell is a “raptivist” whose brilliant musical explosions are the highlights of demonstrations shot by O’Shea for the film. The women wholeheartedly embrace change and dedicate themselves to taking on what was the Chicago establishment of the time—Mayor Rahm Emanuel, Cook County attorney Alicia Alvarez and police chief Garry McCarthy. In the end, all three are defeated.

Even in Canada, we’re aware of the killings by White U.S. police of Blacks Trayvon Martin, Michael Brown, Eric Harris and others. For Chicago, the shooting deaths of Rekia Boyd and Laquan McDonald by the police brought on protests that were unrelenting for years. Janaé Bonsu and Bella Bahhs are two of the major voices raised in those protests—and O’Shea has represented them wonderfully well on film. Much of the film focuses on the women, who are determining their working lives, sexual preferences and friendships. We learn to like them as fallible individuals who are growing as people while fighting the Chicago establishment with honour and deserved venom.

Unapologetic is one of the best films to make the case for Black Lives Matter (BLM), which most everyone who is decent would endorse, and the more problematic “Defund the Police.” It’s pointed out that 40% of Chicago’s budget is spent on the police, which works out to $4 million day. That’s a lot of money spent on an institution, the police, that has made not only allowed racial killings to occur under its watch but has defended the individuals—if it’s members of their force–found to be responsible for what we know to be wrongful deaths.

Should BLM be endorsed? Yes, says this reviewer. What about defunding the police? Well, maybe not—and certainly not completely. But that’s an opinion by a White man living in Toronto. What about the film? Here that White guy may be on firmer ground. Yes, Unapologetic is a worthwhile film. It’s a forceful, engaging doc on important issues featuring compelling individuals. See it!