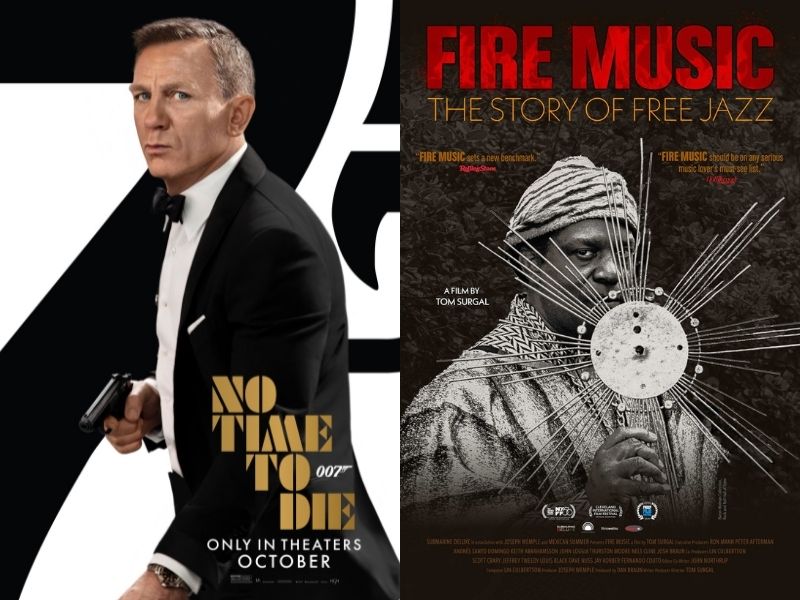 No Time to Die

He’s back for the 25th time and the fifth with Daniel Craig. Bond, James Bond. The man who likes his vodka martinis “shaken not stirred.” British, insolent and arrogant, he’s the suave sexy spy who has fascinated us for nearly sixty years, from the Cuban Missile Crisis to COVID-19. Played by the likes of Sean Connery, Roger Moore, Pierce Brosnan, and lately Craig, Bond has been everything from overly serious to almost farcical, while embodying the best and worst in Western heroes: sexist, racist, imperialist, but also quick thinking, resourceful and above all, fearless. As the decades have gone by, Bond has become an icon, a legend. He’s now as important a figure to the Brits as Sherlock Holmes but he’s also moved onto a global level, up there with King Kong, the Godfather and Tarzan. You can kill him, but he’ll never die.

The numbers for Bond films since Daniel Craig took over the character show the incredible rise in the brand. It’s not just Craig; it’s Bond the icon that is causing box office figures like these: Skyfall, $1,110,526,981; Spectre, $879,500,760. In comparison, Goldfinger, the most famous of the early hits, only did $124,900,000. Not terrible, but hardly what we’ve seen in recent years.

With No Time to Die, Cary Joji Fukunaga has done the franchise proud, creating a Bond for the ages. It’s sure to be a huge hit and Fukunaga’s film is acutely sensitive to the legend of Bond. The film is filled with great action, intrigue, a couple of superb villains and a passionate love story, all staged with panache. Now may not be “no time to die,” as this Bond title claims, but it’s certainly time for a revision and Fukunaga, the director of the legendary first season of True Detective and the brilliant Beasts of No Nation, realized that he needed to modernize his character.

The press has been praising the “new” Bond even before the film came out. Fukunaga had help in giving us a fresher character, especially from scriptwriter Phoebe Waller-Bridge, who made him funnier and much more empathic. We see a Bond transformed in his treatment of women, particularly with Lea Seydoux’s Madeleine, with whom he’s in love in a manner that feels Edwardian. It’s necessary for the story that Bond feels this way but, of course, the old Bond rarely let any emotion betray his intentions with women. A welcome change, no doubt.

There are two new spies in the film, and both are women. Bond doesn’t bed either of them although some flirtation does take place. Cuban born Ana de Armas is sensational as Paloma, a US agent, wearing a sexy plunging gown with high slits, who is able to pull off as many sensational stunts as Bond in a bravura action scene in Havana. She even begins to undress him—because he needs to wear a tuxedo to accompany her to a party. Similarly, Lashana Lynch, the new 007, starts off acting sexy, picking up Bond on her motorcycle, taking him back to his place, only to reveal that she is now working for MI6. Their relationship is purely platonic from that point on; in fact, it might have been more intriguing had there been any sparks disturbing their collegiality apart from who gets to be called 007.

Apart from these worthy changes in the Bond persona—and he had been a bastard towards women in the early films—Fukunaga has done a fine job of evoking the best elements in the franchise. The grotesque gallery of Bond villains is represented by two figures: Blofeld (Christoph Waltz), Bond’s foster brother and long-time arch-rival and Safin (Rami Malek), a former assassin who is now the head of an organization that wants to use a bioweapon to spread a deadly virus around the world. Waltz deliberately underplays his part, making him that much more menacing to Bond, who is eventually goaded into physically attacking him. If Waltz being effective is no surprise, it’s a pleasure to see Malek so brilliant as a deeply wounded figure who seems to be forced into being a psychopath. Also underplaying his role, Malek subliminally reminds one of the early Peter Lorre in his portrayal of the deeply intelligent, fundamentally flawed Safin.

Fukunaga is at his best in creating the lynchpins that have always made the Bond films work—the all-action set pieces. Famous for scenes involving fast cars with gadgets, this Bond action sequence is one of the best ever. Racing through the hills of Matera, Italy, Bond makes his vehicle avoid way too many cars and practically leap over a bridge before letting loose with high powered artillery of his own. Another car race in Norway involving a helicopter as well as several vehicles comes off very well as does the Havana sequence with de Armas.

There is the obligatory sequence at the end when Bond is inevitably confronted by the main villain, in this case, Malek. The dialogue is good and the performances excellent by Craig and Malek and yet, the film seems to lose focus and energy as the last battle is played out. Still, there is something to be said for staging this denouement on an island, where the high-tech machinery intended for world domination is, once again, foiled by 007. From Dr. No to No Time to Die, we could always count on our favourite spy to pull us through. In Fukunaga’s Bond we are gifted a chance to see a stylish conclusion to what may be called “classic 007”—and that’s a very good thing.

As Bob Dylan sang in the early Sixties, “the times they are a’changin’,” and that was the case for jazz as well as folk music during that period. Charlie “Bird” Parker’s revolutionary be-bop of the late Forties had turned into the more conventional contours of hard bop, with quintets playing extended solos on famous show tunes and pop hits even though the world was rapidly evolving politically and culturally. Tom Surgal, a veteran music video director and musician, has made with Fire Music, a labour of love: a film that passionately traces the musical fight against the mainstream through the evolution of the brilliant but obscure form known as free jazz.

The major players Surgal outlines in the film were rebels, who refused to play the kind of music you could have heard in nightclubs back then. The rural Texas saxophonist Ornette Coleman, the arcane but elegant pianist Cecil Taylor, the iconoclastic sax player and ex-soldier Albert Ayler and the cult leader who claimed he was from Saturn, Sun Ra, are featured in Surgal’s doc in knock-out archival footage that would never have worked as an opening act for Frank Sinatra. So too are John Coltrane and Eric Dolphy, multi-instrumentalists who could play for “the man” but chose to make the kind of music they wanted to hear. It’s piquant to hear Coltrane, whose greatest hit was “My Favorite Things,” play Ascension, a free form masterpiece that took decades for most people to unravel. Dolphy, who accompanied Coleman on the album Free Jazz and Coltrane on many projects, also created works of free improvisation, although as a flutist (at first in the popular Chico Hamilton band), saxophonist and bass clarinetist, he could have played in orchestras, not just jazz bands.

Surgal’s doc not only shows brilliant footage of those greats, but it also includes fascinating commentary by the eminent (and witty) critic Gary Giddins and such surviving musicians from that time as Bobby Bradford, Sonny Simmons, Sirone Jones and Prince Lasha. Still feisty, they bring their legendary friends back to life. Adding to the flavour of the film, Surgal has added brilliant visuals between interviews and musical scenes, which offer the flavour and sensitivity of avant-garde art. Included are shots from expressionist, surrealist and Dadaist films by Man Ray, Walter Ruttmann and Hans Richter as well as more contemporary work by Stan Brakhage and the Whitney Brothers. Surgal has also unearthed TV footage from the Fifties, as well as short docs that reveal more than one usually sees in period pieces.

Without being overt, Surgal also offers a sense of the politics of the Sixties. The civil rights and anti-Vietnam peace movements are major elements in an era when the status quo was being challenged. Without being directly political, free jazz fit into a scene when the rise of Black consciousness, exemplified by the increased number of Muslims, the Panthers and more conventional folks in favour of racial equality, was in the air.

At the same time, free jazz fit into a cultural sphere which embraced beat literature (Jack Kerouac, Allen Ginsberg), contemporary dance (Merce Cunningham), avant-garde theatre (productions of Brecht, Ionesco and Beckett) and most importantly Abstract Expressionist art. Though Jackson Pollock had died tragically in a car accident before Ornette Coleman entered the New York scene, his painting The White Flight served as the cover for Free Jazz, the 1961 recording that effectively launched the movement. With Coleman and trumpeter Don Cherry as well as great bass and drums on one channel (or speaker or headphone) and Eric Dolphy leading a group including Ed Blackwell on drums on the other, the album is one of the most difficult and brilliant pieces of music of the period.

By the Seventies, the revolutionary fervor in the United States had become depleted. After the fall of Saigon and Watergate, U.S. political movements became bereft of idealistic supporters apart from those interested in ecology, feminism and Black identity, but they were no longer united in a common cause. The free jazz movement no longer addressed anything resembling the mainstream, but a smattering of influential groups arose despite the increasingly hostile environment.  The AACM (the Association for the Advancement of Creative Musicians) established a space where young Black free jazz musicians such as Muhal Richard Abrams, the brilliant Anthony Braxton, Lester Bowie and Roscoe Mitchell created work. In Europe, the Global Unity Orchestra with Peter Brotzsmann, Willem Breuker, Alexander van Schlippenbach and, on occasion Han Bennick made brilliant music.

But by the early Eighties, the free jazz movement had come to an end. Musicians persisted in making their beautiful work but the new music of the period, spurred on by the Marsalis family and eventually the Ken Burns documentary series Jazz, wrote them out of history. Wynton Marsalis’ “American classical music,” jazz from Armstrong through Ellington to Miles, Monk and Mingus, became enmeshed into the cultural fabric. Wonderful crazies like Sun Ra and other experimentalists were erased. That’s why Fire Music is an important film. Tom Surgal and his producers Thurston Moore, Ron Mann and Rosanna Arquette and many more, deserve praise for bringing this film to completion. No, Fire Music isn’t for everyone, but it is an important film to have been made.