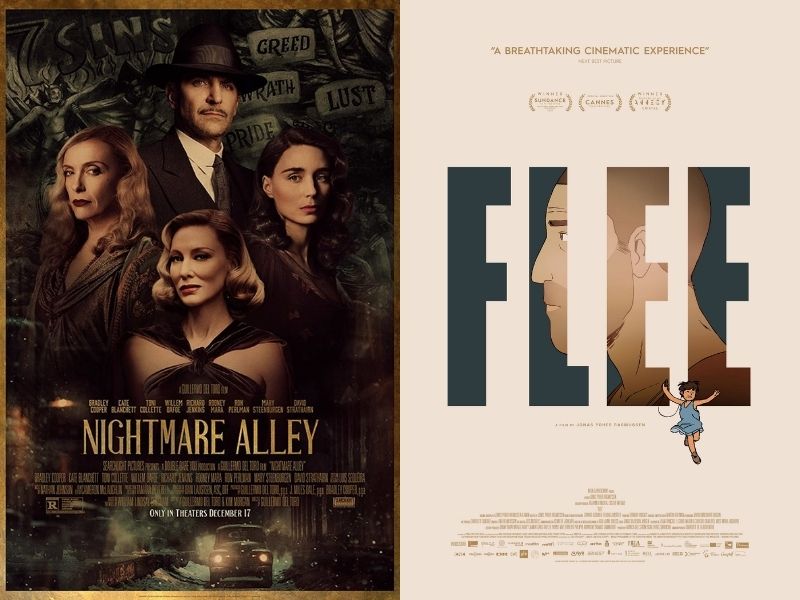 Based on the novel by William Lindsay Gresham

Guillermo del Toro’s Nightmare Alley is a tour de force brilliantly recreating the heights of film noir when twisted characters would emerge out of the shadows to desperately try their luck at success only to be trapped by a cruel and implacable fate. Noir is a perfect genre for del Toro, the Oscar winning director of The Shape of Water and part-time Toronto resident. He’s a true cinema nerd who has the talent to replicate the best of a stylish form that hit its peak in the late ‘40s when returning war veterans and wised-up civilians responded viscerally to dark portraits of people haunted by the past, struggling against forces—corrupt rich men, femme fatales, a system they hated—which would excite and then destroy them.

Del Toro read William Lindsay Gresham’s novel about a former carnival mentalist on the make in the post-war fashionable night club circuit decades ago when Ron Perlman gave him the book. (And Perlman is rewarded by the crucial part of strong man Bruno in the film.) He certainly knows the original Nightmare Alley, which starred former matinee idol Tyrone Power sporting a downbeat look appropriate for the film and the period. This is a remake created as a passion project, which you can sense in every scene in the film. Not only is del Toro on top of his game, so is the team he assembled, including cinematographer Dan Laustsen, production designer Tamara Deverell, co-scriptwriter Kim Morgan and art director Brandt Gordon. You feel enmeshed by the atmosphere in Nightmare Alley whether in the tawdry but colourful carnival opening scenes or the art deco apartments, hotels and offices that dominate the second half of the film.

The story is structured lucidly, starting and ending in a carnival, which by the late Forties was a garish, run-down form of entertainment, definitely on its last legs. Stan Carlisle, down on his luck but game for anything, is casually hired into the carnival by Clem Hoatley, a tough plain spoken man, who makes cynicism seem like a virtue. Soon he’s working with Zeena, a mentalist whose act is going downhill because her partner Pete has descended into alcoholism. The show is sometimes rescued by the quietly beautiful Molly and Stan, who is clearly having an affair with Zeena but would prefer a younger partner. At the end of act one of this two-parter, Stan is off to the city with all of the mentalist’s methods and Molly.

But that doesn’t convey what del Toro has done in this opening section of the film. Every scene has been gauged for maximum impact. When Stan tricks a tough small-town cop into not closing the show, his “mentalist” tricks are perfectly played out and then explained to Clem (and the audience) afterward. Zeena seducing Stan in a bath; Clem explaining how to make someone into a geek, the carny’s lowest of the low; Pete waxing melancholic to Stan: all are visualized and played out so persuasively that the entire experience of carnival life is brought to life succinctly and memorably.

That same attention to craft and detail is brought to the fore again and again in the much different “act two” in which Stan bring Molly and his act to a big city, where he plans to fleece the wealthy and powerful. The locale has changed and so does the production design and art direction in the film. We’re immersed in art deco décor and gorgeous high-style period costumes. The dialogue has a higher tone, and the colourful characters have estates, not beat-up rooms in a carnival. Del Toro and company adjust beautifully as the plot twists in a different way. Major characters appear: the Kimballs, still distraught over the death of their son in World War One; Ezra Grindle, a powerful man with deep secrets and Lilith, a gorgeous psychologist.

A word about film noir or rather two words: femme fatale. Nightmare Alley is a classic noir, and it has one of the most devastating of those femmes, Lilith (a demonic figure in Judaic mythology) Ritter, the psychologist, who engages Stan is a near-Wagnerian love-death struggle for each other’s minds and bodies. While other money-making plots are being played out, their deadly dance overshadows the rest of the film. It’s fair to say that the concept of the femme fatale, though ancient, is hardly politically correct. But it is a must for film noir.

Two words about the actors: perfectly cast. Leonardo DiCaprio was the first choice to play Stan. Thank the heavens it didn’t happen. Bradley Cooper is lighter on his feet: agile and more fallible. The frosty attractiveness of Cate Blanchett’s Lilith wouldn’t have worked as well opposite DiCaprio. Cooper and Blanchett are fascinating in a way that the always confident DiCaprio can’t be anymore. As for the rest: Richard Jenkins has a short speech where he exposes the harsh depths of Grindle; it’s so memorably appalling as to be Oscar-worthy though I doubt it will happen. Toni Collette and David Strathairn convey the love and pity in a failed relationship with an economy of movement and language that appears effortless and is breathtaking. Willem Dafoe is memorable, when is he not? Mary Steenburgen has one chance to make something of a scene and she does so astonishingly well.

Is there a problem with Nightmare Alley? This review is a rave by someone who has seen way too many film noirs and read books by the masters of the genre, Jim Thompson, David Goodis, Cornell Woolrich and the rest. Nightmare Alley is, perhaps, too perfect: a stellar exercise that makes you question why you love it so much. It said so much to audiences in the 1940s but does it say anything to the majority of us now—apart from we nerds? I leave it to the rest of you to decide. See this film. Is it as great as I imagine it to be?

Perhaps the most unique film of the year, Flee is an absolute winner–a must-see even for casual viewers. The Danish film is a true rarity, an animation documentary propelled by the compelling story of Amin Nawabi (a pseudonym), an Afghan refugee who has overcome adversity to build a life for himself in Denmark. Now at the point of marrying his male lover, Amin finally agrees to tell his true story to filmmaker Jonas Rasmussen, a long-time friend. What he has to say is a gut-wrenching account of an exiled family desperately trying to find a place to be together in a world that is overwhelmed with tragic tales of displacement and cruelty. It’s also, ultimately, a tale of triumph, with Amin finding his own path to freedom and responsibility against all odds.

Set up like a series of psychiatric sessions, the film depicts Amin, on a couch, recalling for a prompting Rasmussen how he came to Copenhagen—and why much of what he told about his personal life has been a lie up to now. In animated sequences punctuated by archival footage, Amin recounts how his mother, the head of the family since his father “disappeared” after being arrested, was able to get his brother, two sisters and him to accompany her to chaotic post-Soviet Russia as Afghanistan plunged into its initial Taliban authoritarian regime. With the help of an older brother who had already relocated to Sweden, the desperate family barely survived in Russia without passports, virtual prisoners in their own small apartment.

Much of the film is taken up with attempts to get Amin’s family out of Russia, where the corrupt police harass them as they live in fear of imprisonment or, worse, deportation to Afghanistan. That is contrasted with Amin’s contemporary life in which he and his Danish lover are deciding on where to buy a home and if Amin should return to the U.S. for post-doctoral studies. With his life now comfortable, Amin is able to admit to Rasmussen that his entry into Denmark was based on a falsehood: he wasn’t an orphan and certainly knew the whereabouts of family members. But Amin wouldn’t have been allowed to stay in Denmark if he’d admitted the truth—and his admission still involves enough of a risk that a pseudonym had to be employed in the film.

The tale of Amin’s family and their attempts to get to Sweden is rendered with terrifying Goya-esque graphics of people being trapped in containers and other cramped spaces on ships in high turbulent waters. While Amin’s sisters did reach freedom in Sweden after being placed in a container on one voyage and now are safe with their older brother, he and his mother and other brother were sent back to Russia when they were caught by Norwegian and Estonian authorities. Eventually, enough money was saved up to get Amin to Scandinavia, but he ended up in Denmark, not Sweden. Still, as we can see, he did survive and, indeed, prosper there.

The vagaries in laws and attitudes towards displaced people are still quite large and the consequences can be harsh, to say the least. Amin’s story is heart-felt and horrifying. How many other families from Syria, Afghanistan, Lebanon and too many countries to name are in the same position as Amin’s family was—or worse? Flee is an eye-catching story, beautifully made, with a tale that all of us should take to heart in an age of refugees and homeless people.