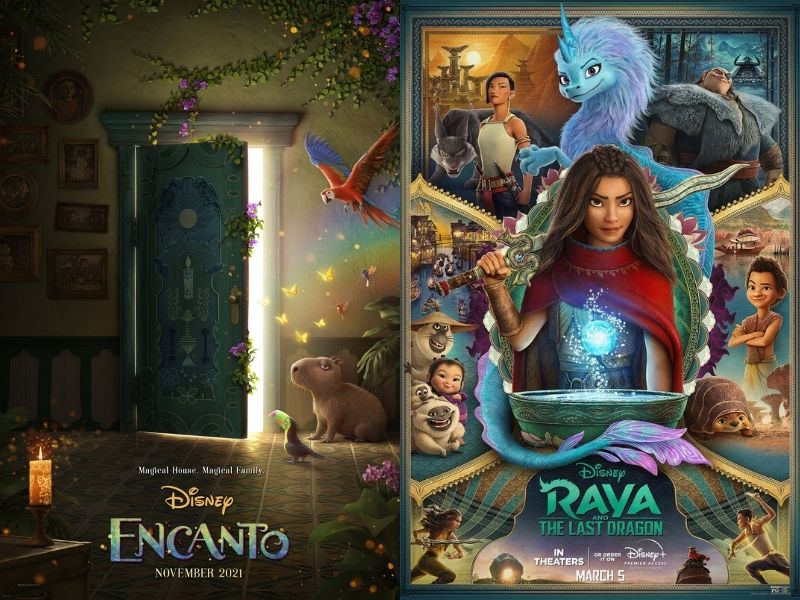 Encanto and Raya and the Last Dragon highlight Disney+

Raya and the Last Dragon

With Ontario’s cinemas closed due to Doug Ford’s over-the-top anti-cultural response to Omicron, it’s left the public more time to stream content than ever before. Luckily there are many viewing options for families and singles ranging from Netflix to Criterion Channel to Disney+. While each offers a multitude of choice films and TV shows, the services are creating their own distinctive identities. Netflix, for example, has spent millions signing up name directors like Martin Scorsese, Ava DuVernay, and Noah Baumbach in their attempt to brand themselves. Criterion is well known for its arthouse cinema, including such eminent—if dead–names as Bergman, Godard and Visconti. Then, there’s Disney+, which is asserting itself with superhero fare like The Eternals and the wonderful Peter Jackson Beatles doc Get Back, but this is one producer/distributor/streamer that will never have to struggle for a name. They have one: Walt Disney. And with Disney comes one word–animation.

This year, Disney put out two exceptional animation features, Encanto and Raya and the Last Dragon. Both films nearly overwhelm us with a plethora of talented animators, directors, composers, technical computer nerd geniuses and voice actors. Some of the names—Lin-Manuel Miranda, Awkwafina, John Leguizamo, Stephanie Beatriz, our own Sandra Oh—are famous but most are not, which doesn’t stop each of them from performing at the top of their game. This is Disney after all. Six people contributed to the story for Encanto, and six completely different writers worked on Raya and the Last Dragon’s tale. And yet both have the sensibility of one man, who has been dead for over 50 years. Walt Disney’s magic and storytelling philosophy still profoundly affects the fables that are released under his banner.

Disney films from the time of Mickey and Minnie Mouse through Snow White and the Seven Dwarfs to Beauty and the Beast are about family—the threats the beloved institution has to endure and the strange and beautiful ways that new loving groupings can be formed. From the time of the Seven Dwarfs, whose adoration and protection knew no bounds, to Beauty, whose love for her father even transformed a Beast and whose graceful spirit inspired a whole household of servants into generous outpourings of affection, Disney has always loved a clan, whether of actual family members or people of like minds and attitudes. He’s also enjoyed the maverick, the one who isn’t quite like the rest—the bookish Belle, the warrior Mulan, Mowgli in the Jungle Book—and emerges as the hero because of being different.

In Encanto, the outsider is Mirabel, the granddaughter of the Madrigal family’s matriarch “Abuela” Alma. She supposedly has no special powers unlike her sisters, the perfectly beautiful Isabella and the powerful Luisa. It was Abuela who brought the family out of darkness—a very bad, violent place, where she lost her husband—and took them to a village paradise, where she could build a glorious villa to house them all. Two generations on and there is at least a dozen descendants–in-laws, uncles, aunts and cousins, little ones and older good lookers—enough so that Lin-Manuel Miranda, who composed the memorable songs, wrote a signature piece “The Family Madrigal,” characterising each one of them.  But all isn’t well in the family: there are cracks appearing, which only Mirabel can see.

It turns out that Mirabel isn’t the only odd one in the family. There’s Bruno, who has magical powers and prophesizes sad things. Mirabel tracks him down to his lair, a mad attic inhabited by rats and other creepy creatures. Like the Beast’s castle, Encanto’s home is alive: the stairs move up and down like elevators and the walls develop cracks, then heal themselves—for a while. Mirabel, with some help from Bruno, must save the family or at least reconcile with her demanding Abuela.

With its elements of magical realism, moments of devastation and hints of death and despair, Encanto is a film with a dark vision kept in a good place by Disney. It’s a very strong work, one of the finest recent Disney features. Encanto has already won the Golden Globe for best Animation film; it’s bound to garner other awards.

Disney films are a world phenomenon so it should be no surprise that Encanto is a Hispanic tale, inspired in good and bad ways by events in Colombia. Nor should it seem at all remarkable that Raya and the Last Dragon is a film featuring solely Asian characters in what seems like an ancient tale from any number of Eastern cultures. Still, it is good to see Disney’s vision be truly global and certainly doesn’t hurt one’s enjoyment of the two animated features.

Raya is a young heroine, the daughter who has inherited the mantle of warrior from her father. Chief Benja had sought to reunite the five tribes of Fang, Heart, Spine, Talon and Talon into one, Kumandra, which had been ruled benevolently by dragons. He failed, and the magical diamond needed to summon the last dragon, Sisu, had been broken into five.

This tale of the reconquest of a land and a reclamation of a vision could have been, quite frankly, rather rote and boring. Happily, the creative forces at Disney saw that there could be room for lots of humour in the tale. Sisu, the dragon, is voiced by Awkwafina and she is brilliantly funny throughout the film. Whether it’s dealing with spicy soup or admitting that her sibling dragons were more powerful than her, Sisu hilariously diminishes expectations for her to be the hero of the piece. Adding to the pleasure in the film is the gradual appearance of another misfit family—a 10-year-old chef and ship owner, a baby con artist with accompanying tiny thieves, and a huge scary-looking but nice warrior—who help Raya and Sisu get the diamond back.

While Raya and the Last Dragon may not be quite the accomplishment that Encanto is, the film is filled with charm and high spirits. Both Raya and Mirabel make their way in these stories without the aid of a boyfriend: they’re independent spirits who can bring a family or a world together, given time and some good friends. They’re the heroines in these films. That’s a vision which everyone can endorse.

Encanto and Raya and the Last Dragon will be getting more attention in the next couple of months as the festival season heats up, leading to the Oscars, which are on March 27 this year. You can see them and lots of other fine animation on Disney+–and many other things, too.