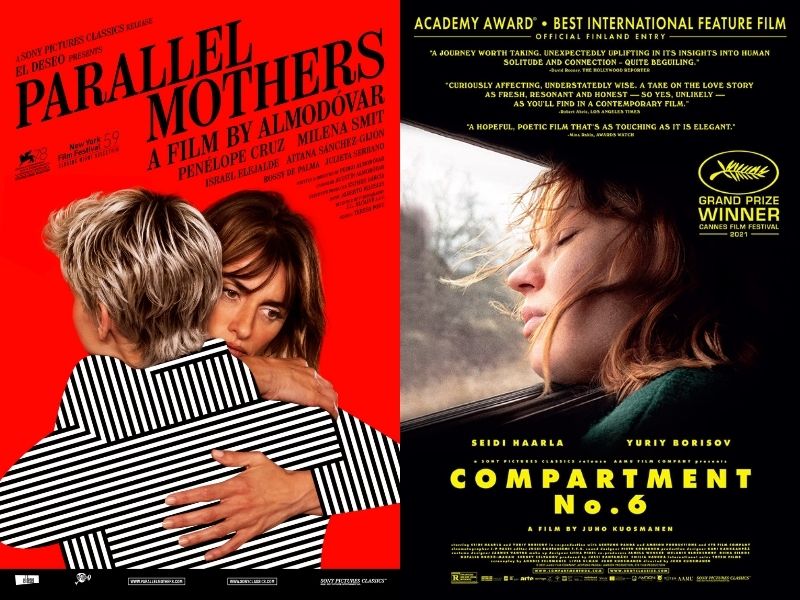 With Parallel Mothers, Pedro Almodóvar continues his late career resurgence, which started two years ago with the semi-autobiographical Antonia Banderas’ starrer Pain and Glory and continued with the extended short drama The Human Voice, in which Tilda Swinton gave a knowing, slightly ironic gem of a performance. It’s Penelope Cruz’ turn now, with the director’s new masterpiece featuring her as Janis, a mature single mother, who develops a strange and compelling friendship with the very young Ana (Milena Smit), who is giving birth at the same time as her in the next hospital bed.

The story of babies switched at birth is an old one: it was used over 100 years ago by Mark Twain in a novel with racial implications, Pudd’nhead Wilson, and in two Gilbert and Sullivan comic operas, H.M.S. Pinafore and The Gondoliers. The title gives away that Ana and Janis’ babies will be exchanged accidentally but Almodóvar has much more going on in the film than that ancient plot device. He wants us to understand the lives of these two very different women and the impact that responsibility has on them.

Cruz’ Janis is a fiercely independent character—a successful photographer with a deep connection to her family, whose radical past goes back to the Spanish Civil War when her great grandfather was killed by Franco’s Fascists. When she discovers that she’s pregnant from her relationship with Arturo, a married forensic archaeologist, Janis decides to have the baby alone. Janis’ hospital parallel, Ana, is also single, but has issues with her own mother, who wants to pursue her acting career and only pays lip service to helping her daughter.

Janis and Ana become friends, a relationship, which deepens when the two meet months later after a tragedy has struck: one of the babies has died in her crib. Almodóvar repeats Hitchcock’s narrative strategy in Vertigo: rather than playing out the question of whose baby really died, he makes us complicit in Cruz’s decision to pretend that it’s her child who is alive. She hires the bereft Ana to babysit her own child but it’s clear that such a deception can’t and shouldn’t last forever.

And here’s where Almodóvar offers his coup. Arturo shows up again in Janis’ life as the archaeologist who can uncover the bodies of Cruz’s great grandfather and the other radical patriots who have been in a large, unmarked gravesite for over 80 years. By this point, Cruz’ Janis has revealed the truth to Smit’s Ana and, after much anger, they have reconciled as friends. Ana comes along with her baby to the now exposed burial ground, where Janis’ family—and much of the village—have gathered to take their dead and bury them properly. In a poetic gesture– masterful from Almodóvar—they lie briefly in the soil where their deceased heroic relatives have been for so long.

Parallel Mothers is a deeply moving film. It’s a melodrama, which works on personal and political levels. Almodóvar has created a profound film, with true emotional depth. Cruz is terrific in the film as is the newcomer Milena Smit. When people talk about the difference between art films and escapist fare, they’re talking about works like this. I recommend this film unreservedly.

Juho Kuosmanen, director and co-writer w/Andris Feldmanis & Livia Ulman based on the book by Rosa Liksom

You can’t take a train from Toronto to Iqaliut, Nunavut but Russians can go from Moscow to Murmansk even though it lies over 2° north of the Arctic Circle. In Compartment No. 6, Laura, a Finnish archeology student, and Lyokha, a neophyte Russian miner, fight, drink and have a dinner together while tentatively falling in love over the course of the kind of train ride that could still take place 30 years ago, in a time when telephone booths and video cameras were part of our daily lives.

We see Compartment No. 6’s story unfold through Laura, a bisexual romantic whose relationship with the intellectual Irina is based in part on her admiration for Russia’s dramatic past. She’s as much in love with Irina’s apartment with its gorgeous ancient furniture, high ceilings and old wooden floors as she is with the effervescent but superficial Russian woman. When she meets Lyokha in their shared railway compartment (number 6), Laura is put off by his aggressive manner and excessive vodka drinking but when she gives him a chance to overcome his awkwardness, it turns out that he has a worker’s pure heart and soul.

After a chance encounter with a fellow Finn, whose idea of cool is singing the Troggs’ “Love is All Around,” and feels no compunction stealing Laura’s camera, Lyokha starts looking very good. But the payoff takes place in Murmansk, when Laura is desperate enough to contact Lyokha again to help her to see the petroglyphs that had motivated her journey to the Arctic. There is something wonderful about a film which depicts two young adults having a better time than sex throwing snowballs and rolling over each other in the midst of a storm, having the time of their lives being kids together.

Rosa Liksom, the free spirit who wrote the novel on which the film was based, is now a professor, which hasn’t prevented her from writing this brief homily: “I resist the thinking that says you should squeeze yourself into a tube of toothpaste for a nice set of academic dentures.” Compartment No. 6 works as a film due to the persuasive performances of Seidi Haarla as Laura and Yuri Borisov as Lyokha. Neither is likely to be a star even in their own countries but they’re fine in this well-judged film. You’ll never get to Nunavut by train but you can see this film, which brings the Arctic into Russia in a way that’s foreign to us in Canada. More’s the pity.