Film Review: The Phantom of the Open & The Pursuit of Perfection 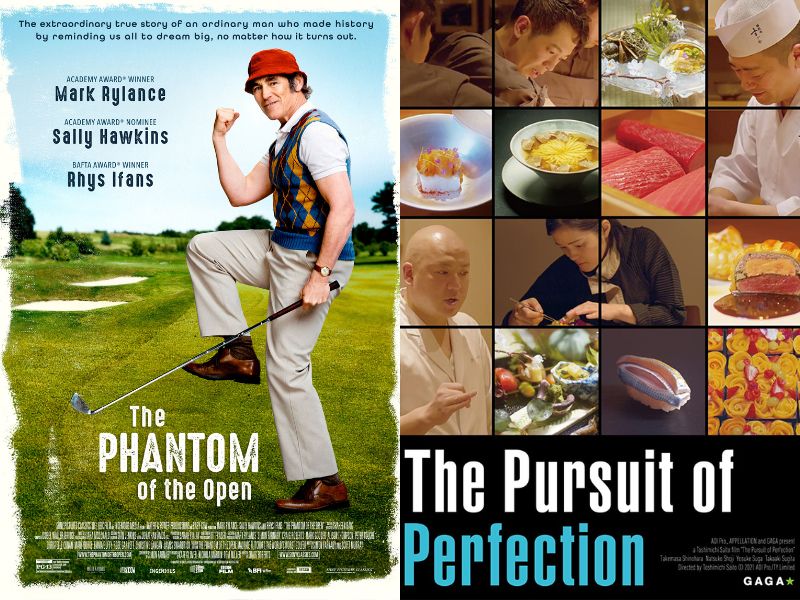 Going for the top as a golfer or a chef

The Phantom of the Open & The Pursuit of Perfection

The Phantom of the Open

Script by Simon Farnaby based on his book, co-written with Scott Murray

The Phantom of the Open isn’t an opera, nor is it a satire. It’s a sprightly and slightly sentimental film about a British factory worker in the late 1970s who rebounds from being made “redundant” in Thatcher’s regime—or as we say, “out of work”—to deciding to become a professional golfer. After all, shouldn’t people dream their impossible dream especially if the odds, and common-sense, are against you?

A disarming real-life comic tale of the notorious “world’s worst golfer” Maurice Flitcroft, The Phantom of the Open is a story made for cinema as it’s full of two elements loved by audiences: sight gags and humiliating drama. Flitcroft was a shipyard crane-operator from Cumbria, England, who decided to enter the prestigious British Open in 1976 despite having taken no lessons and evincing no particular athletic talent.

As the film shows in delicious detail, he proceeded to shoot a score of 121, by far the worst result in the contest’s history. His errant shots, putts and sad attempts to get out of sand traps are shown in Keystone-Cops detail. So is his stoicism, which began to draw audience applause by the end of his day. That might have been the end of it except for two factors, the British press, which always knows how to play out a story to its fullest and Flitcroft, who turned out to be indomitable as a contestant and golfer.

The film follows Flitcroft as he pursues his crazy dream after that defeat while encouraging his twin sons, who want to become the world’s best disco dancers—and, in fact, do so. (This is very much a film set in the late Seventies, when disco was at its height and Thatcher was at her controversial pomp as Prime Minister of the U.K.)

Craig Roberts’ film benefits greatly from brilliant casting decisions. For the leads, the decision was made to ask Mark Rylance to play Flitcroft and Sally Hawkins to take on the role of his effervescent and loving mate, Jane. Both choices were impeccable.

Mark Rylance is a consummate actor, a one-in-a-million talent, who could actually read the phone book (assuming such a thing still existed) and keep you riveted. Watching him is mesmerizing: he uses his body to perfectly express Flitcroft’s slightly macho character while measuring his voice and demeanour to encapsulate not just the public face of the player but what makes him tick inside. Rylance has, it’s true, developed some mannerisms—he loves to hesitate and figures out ways to avoid looking directly at the camera—but he still is unobtrusively persuasive in this, as he is in so many roles.

Hawkins is terrific as his soulmate. Both actors have a way of making you feel that they’re real people in the roles they perform on stage, television and screen. Sally Hawkins matches Mark Rylance beat for beat–funny sometimes, angry on occasion, but always true mates, in love with each other and committed for life. To do that as actors is so tough, yet the two make it feel effortless.

If The Phantom of the Open was only about the relationship between Maurice and Jane Flitcroft, the film would be amazing. But there’s a plot and it’s only intermittently absorbing. We follow Maurice Flitcroft’s machinations as he continues to enter the British Open—which he has been barred from performing—under strange names and identities, as the Frenchman Gerard Hopp, American Gene Paycheki, James Beau Jolley and (my favourite) Count Manfred von Hoffmanstel. Of course, his deceptions were always found out and Flitcroft was banned from appearing at the Open, over and over again.

Someone involved with the film must have decided that melodrama had to be introduced into the film, which is unfortunate. A divisive relationship between the more conventional older brother Michael and the rest of the crazily optimistic Flitcroft family is given way too much time, in my estimation. It doesn’t add much to the film, which is warm and funny and, at its heart, quite eccentric.

Not every Canadian is charmed by the muted decorous life of the Brits. As odd ducks, British people can be lovely, and Maurice Flitcroft is a classic example of such a figure. I find him, and the film about him, quite enjoyable. Perhaps it’s not for everyone but The Phantom of the Open will appeal to lovers of eccentric families, dreamers, great actors—and, yes, those who appreciate the impossible dream, whatever that might be.

The Pursuit of Perfection

Note: The Pursuit of Perfection is the only documentary at this year’s Toronto Japanese Film Festival, but there are 23 fiction features, which will also be screened between June 16 and 30 at the Japanese Canadian Cultural Centre’s Kobayashi Hall. After two years of virtual screenings, this year’s events will be in-person, allowing for food and art exhibitions to take place as well. For more information, please consult: https://jccc.on.ca/films/tjff

The Japanese have a philosophy, wabi sabi, which embraces the beauty of imperfection. Perhaps that’s why so many artists and craftspeople in Japan admire perfection so much. When you acknowledge that inevitably your aspirations can never be fulfilled but you still strive to do so, something wonderfully humbling is taking place. It’s the quest that becomes the thing to embrace and enjoy, not the impossibility of the task.

Such thoughts might seem strange when considering Toshimichi Saito’s documentary about Japanese chefs but then he did title it The Pursuit of Perfection. When one thinks about Japanese cuisine, the presentation of the dishes immediately comes to mind. In a typical meal, a rice and a soup bowl will be accompanied by okazu or side dishes, as many as one wants. Each dish or bowl is separate, emphasizing the order and clean lines of the classic dinner approach. That’s even more obvious when eating in sushi restaurants, which are ubiquitous in Toronto and are even more spare in their presentations.

With that understanding, it’s clear that the best Japanese chefs, the ones creating the finest meals, would pursue their quest for perfection by embracing a linear path in both their career advancement and choice of cuisine. Saito mirrors this notion of clean lines by dividing his film into four segments featuring a quartet of brilliant chefs in Tokyo, profiling one after another. Surrounding these sections are contextualizing comments by El Bulli restaurant’s legendary master cook Ferran Adrià and food critics Matt Goulding and Kat Odell who talk knowledgably about Tokyo as a brilliant city for restaurants and about the chefs themselves.

First up is Takemasa Shinohara, a big, fit bald-headed charismatic man, who is the most prominent kaiseki chef in Tokyo. Since kaiseki is the most traditional of Japanese cuisines, Shinohara makes his difference by using as much locally sourced produce as possible and cooking in a style he calls “Cho-shu” or for “townspeople.” Of course, the meals he creates are hardly what one would get in towns or even most metropolises in Japan. But there’s a humility in his approach, which must translate into him making the most extraordinary dishes. Shinohara talks a lot about his homelife in a much smaller town and is quietly poetic when relating his love of nature and simpler past to what he tries to evoke in his dishes. Truly authentic and approachable, Shinohara is fun and it’s appropriate when he reveals that he would have become a karate master if he hadn’t embraced the idea of being a chef.

Saito’s second subject is a rarity, a woman who is a Japanese master chef. Natsuko Shoji was honoured as Asia’s best pastry chef in 2020 and this year she won Asia’s best female chef. Unlike Shinohara and the other two profiled chefs, her restaurant is quite small, only serving six customers per seating, and very exclusive. Still under 30, Shoji became famous for her fruit cakes, sold in beautiful boxes, like the kind you’d use for jewelry, and made each day with the freshest of product. Her work evolved from there to her personal restaurant called Eté, which serves exquisite courses like sea urchin tart with cured egg yolk and Jinhua ham. Shoji is a young woman totally obsessed with her work and achieving the unachievable: perfection.

For his third chef, Saito chose the truly professional and very upscale Yosuke Suga. Unlike the affable Shinohara and the personal Shoji, Suga embraces his public persona as a celebrity chef. Both his grandfather and father were restauranteurs and Suga was mentored by the acclaimed French chef Joël Robuchon. After two decades with Robuchon, he opened his own restaurant Sugalabo in 2015 for which he’s received universal acclaim. His work combines the French cuisine, which he’s mastered, with the apparently unadorned but truly gorgeous approach Suga has inherited as a Japanese cultural figure. Suga is a tougher figure, a task master, and believer in a classic restaurant style.

Saito’s fourth chef is a sushi master, Takaaki Sugita. Trained well in the art of choosing the right fish and knowing how to prepare each as a delicacy, Sugita launched a successful establishment and then moved it after a decade to the place where his wife’s family had their restaurant. Though it wasn’t built to be a sushi restaurant, Sugita has made it work with a brilliant staff and his own lovely manner. It should be mentioned: the sushi is extraordinary.

Are these chefs and their varied cuisines perfect? No, but I’d love to enjoy their attempts!

The Pursuit of Perfection is a very well-made doc and a great example of what the Toronto Japanese Film Festival will produce for audiences over the next two weeks: films worthy of appreciation and discussion.