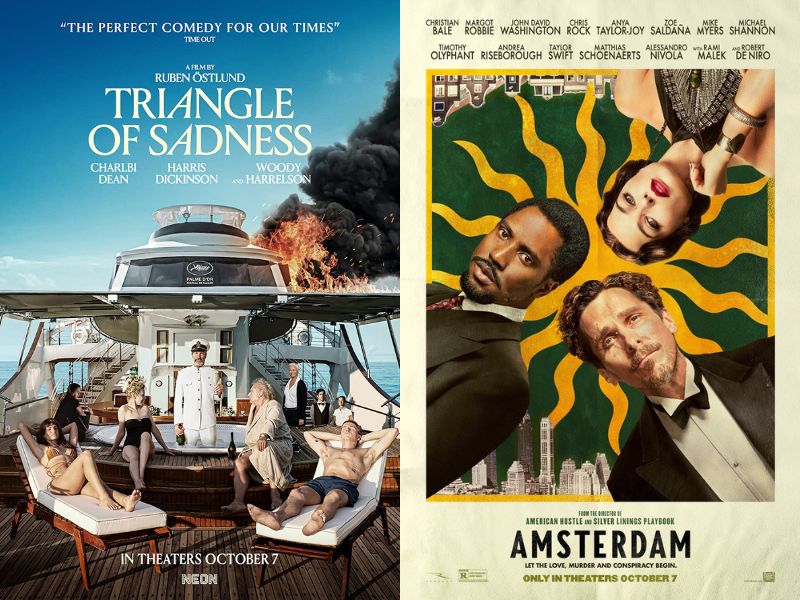 Just a couple of Auteurs

This year’s Palme d’Or winner at Cannes, Triangle of Sadness, is a devastating satire that will prove to be controversial now that it’s being released commercially. Directed by Ruben Ostlund, the Swedish director whose Force Majeure won a Jury Prize at Cannes and The Square, which also garnered the Palme d’Or, he’s clearly one of the hottest filmmakers in Europe. But—fair warning—this is very much a festival film, which will divide viewers. Ostlund has made a dark and rich comedy, in which everyone has their reasons for doing what they do, and none are good ones. It’s funny, but who do you root for in a film like this?

Triangle is structured in three sections. In the first, we see the phony world of fashion models and their sexist ways of dealing with each other, as we’re introduced to Yaya (Charlbi Dean) and Carl (Harris Dickensen). Much of this sequence deals with the age-old question of who picks up the cheque? Carl is only a mediocre model, who doesn’t get paid much for his gigs while Yaya, his girlfriend, is a supermodel and paid accordingly. Yet Yaya expects Carl to pay for dinner because he’s the man. This sequence is played out like a Pinter play, with clichés about manhood and role playing and societal expectation spoken and respoken in ways that make you think—and cringe.

In the lengthy second part, our models, Yaya and Carl, are trophy members on an obscenely rich cruise, which includes Russian oligarchs and British arms dealers. All the rituals of expensive shipboard dramas are shown: the drinks, aimless games and inconsequential conversations while everyone lapses into indolent luxury.

The funniest and most intellectually direct sequence in the film takes place on the ship when the alcoholic Marxist ship’s captain (Woody Harrelson) duels with the capitalist billionaire Russian (Zlatko Buric), each offering the best quotations on why their economic systems are better. Heady stuff—but Ostlund adds a long scene with the grossly wealthy tourists vomiting their overly rich food. You may find it funny, or you might have to avert your eyes. And yes—this sequence is potentially the deal-breaker for Ostlund’s first English language film to be a hit in North America. The audience that’s interested in Triangle of Sadness does not consist of gross-out comedy fans. I know people who left the film—or won’t go to it—because of the sequence. I watched it, of course, but I have to be honest. It will turn off some people.

In the very strong concluding section, Yaya, Carl, the Russian oligarch and various other survivors of the yacht’s explosion, which spectacularly ended the second chapter, are on an island. This section has been compared to Lord of the Flies and it is a gripping parable on how one can exercise power in a way that subverts the class system. The survivors quickly realize that none of them—the models, the surviving upper-class, can make a fire or catch a fish. Only one person can: Abigail (Dolly de Lion), who had been a maid on the ship. In the new and very real brave new world, she’s in command. And we see as it turns her into someone who is just as venal as the rich people were on the ship, demanding sexual favours, humiliating others, willing to commit murder to maintain her position.

Those of us with a literary or historical bent will recall Jonathan Swift’s A Modest Proposal, in which he suggests that the impoverished Irish sell their children as food for the rich English.  People were horrified but they read it—and continue to read it today. Ostlund reminds me of Swift and that’s high praise indeed. But I’m not sure if I can recommend his film. You must be willing to accept something harsh and tough to watch Triangle of Sadness. But may I say it? If you can, you should see it.

David O. Russell hadn’t made a full-length film since 2015, and that was a flop, so it isn’t surprising that his new feature Amsterdam struggles to find its style and point-of-view.  For a while, it’s a romantic Jules and Jim tale of two recent World War One veterans (Christian Bale’s Doctor Burt Berendson and John David Washington’s soon-to-be-lawyer Harold Woodman) with their spellbinding female (nurse and muse Margot Robbie’s Valerie Voze) being young and free—and dancing the tango–in post WW-One Amsterdam. Then, it’s a film noir with Bale’s doctor and Woodman’s lawyer trying to extricate themselves from a murder charge in a very atmospheric ‘30s Harlem. Finally, it becomes a politically charged assassination thriller with the reunited Bale-Washington-Robbie trio fighting to save New Deal democracy in the face of Fascism. While all that’s taking place, the tone keeps on shifting from comedy to romance to suspense—and I haven’t told you yet about half the cast and what they’re contributing to the film.

Amsterdam is a strange movie which might be another way of saying that it’s a typical David O. Russell film. After all, Russell is the director who launched his career with Spanking the Monkey, which starred the late great Canadian performer Alberta Watson as an incestuous mother in a wonderful part which even the very brave Susan Sarandon turned down. Since then, he’s had hits with American Hustle, in which con artists work with the FBI, the Oscar-winning dysfunctional family melodrama The Fighter and probably his best, Silver Linings Playbook, in which a bipolar man (Bradley Cooper) falls in love with a very sensitive young widow (Jennifer Lawrence) while learning how to dance.  Those films worked amazingly well but others like Joy, about the inventor of the Miracle Mop, have been failures.

A lot of money and prestige is riding on Amsterdam being a hit, which might explain his star-studded and extremely bankable cast: Margot Robbie, Christian Bale and John David Washington as the leads with a supporting cast of Rami Malek, Chris Rock, Robert De Niro, Zoe Saldana, Mike Myers, Michael Shannon and—yes!—Taylor Swift. Even if Amsterdam struggles to be coherent, you can’t criticize Russell and his producers for not trying to make it attractive to audiences. The problem with Amsterdam is two-fold: plot and tone. What is this film about and is it funny or satirical or dramatic? (Not that a film can’t shift tone, but does Russell have command of the changing attitude in the film as it evolves?)

Here’s a bit of history: In the fall of 1934, when the Great Depression had swept across the world leaving people broke and terrified, and Fascist dictators Mussolini and Hitler were spreading their terrifying rhetoric in their countries and abroad, the most decorated Marine in the U.S., General Smedley Butler, testified before the U.S. House of Representatives that he had been contacted by some of the wealthiest industrialists in America to make a speech to help to overthrow the government. The Business Plot is a problematic moment in American history: was Butler right (and many facts back him up) or was he delusional?

In any case, Russell takes the Business Plot seriously and it does have resonance in the present-day Trump-Bolsonaro-Modi reality where modern-day Fascism in on the rise throughout the globe. But Amsterdam shifts its story continuously, from knowing references to drug use to interracial relationships to critiques of capitalism. Keeping the film—and the narrative—on-board is Christian Bale, who gives a brilliant performance as the idealistic Jewish doctor, who has done wonderful work for Blacks and poor people and war veterans while perennially trying to impress his wife and family who are profoundly anti-Semitic. Bale carries the movie, making it emotional when—by all rights—it hasn’t earned it.

Russell has always been a fine director with actors though apparently, he is a terrible person on the set. But the results are there: Oscars for Melissa Leo and Christian Bale for The Fighter, Golden Globes for Leo in The Fighter and Jennifer Lawrence in American Hustle and Leo as the winner and Lawrence as the runner-up American Hustle.

Amsterdam is an odd film. By no means is it a success. Did I enjoy it? Yes, but not all of it, though there is a lot to appreciate in its sheer randomness. The real problem is that Russell is trying to do too much, and he just can’t find the proper feel, which would make the film work. You can’t say he didn’t try—and you can’t say that he succeeded.