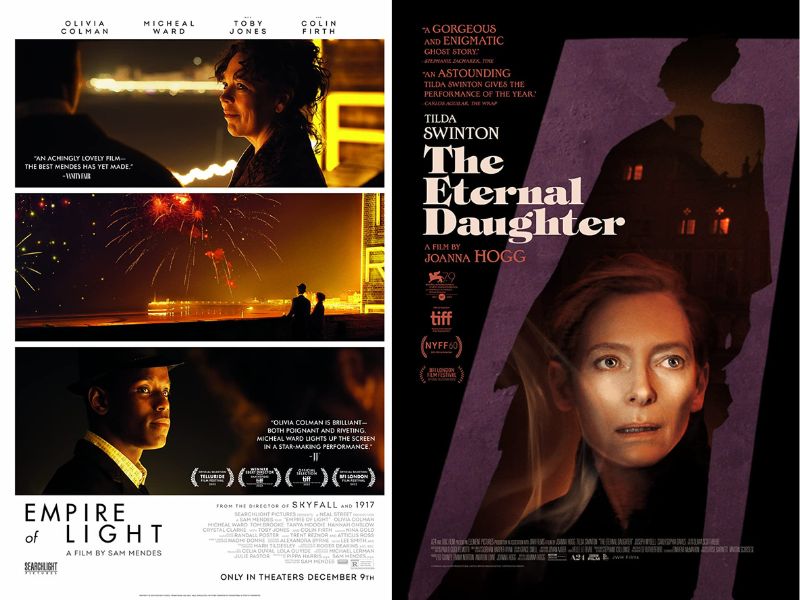 Sam Mendes has made a surprisingly touching film about love, life and cinema set in an English seaside town in 1980. Empire of Light is not the kind of work one expects from the filmmaker of such huge James Bond hits as Skyfall and Spectre, but then Mendes is also an acclaimed theatre director and certainly knows how to work intimately with actors on budgets that are less than epic. In this film, he presents life unfolding among people who occupied the real world of Thatcher and striking workers and punks during tough economic times. Mendes’ characters are hardly political, but they couldn’t be farther away from the fantasy world of superstar spies. He’s chosen to depict people who may have had smaller dreams, but who also experienced dramas in those days that are worthy of being told.

Mendes’ protagonist, Hilary Small (Olivia Colman), works at the cinema, the Empire of Light, next to the amusement park and the beach, which are the main attractions in town. Like the park, the movie house has seen better days but, much like Britain, it soldiers on. Although there’s camaraderie among the staff, Hilary feels isolated from them, particularly because she’s carrying on a not-entirely-secret relationship with Mr. Ellis (Colin Firth), the theatre manager. When Stephen, a young and handsome Black man who is hoping to go to college, arrives as a new employee, Hilary takes him under her wing, which includes a tour of the building.

We discover along with Stephen that the Empire of Light, which still operates two theatres, used to have more, as well as an immense rooftop dining area. Now abandoned to the birds, with broken windows and worn-out booths, the upper deck of the building has the poetic feel of old factory lofts and crumbling mansions. It’s there that Stephen fixes a bird’s wing and Hilary falls for him. They make love and later, in one of the few spectacular scenes in the film, share a fraught New Year’s Eve looking at the fireworks together on the roof.

Though they are smitten with each other, Stephen and Hilary have to face racism and ageism (Hilary is much older), as well as the fear that their fellow employees wouldn’t be happy with their relationship. Then, Mr. Ellis springs a surprise: the Empire of Light is going to have the exclusive engagement of the biggest British film in years, Chariots of Fire, which will include a prestigious premiere, with local and London bigwigs attending.

Mendes, who is superb at slowly revealing his story, lets us know that Hilary has had a nervous breakdown recently and is suffering from one now. Colman, who can be everything from comic to tragic, gives the film what it needs, two bravura scenes, one at the premiere and the other at her apartment as Stephen attempts to calm her down.

Unlike the actors in classic British dramas, famed for their tight-lipped performances, Olivia Colman is riveting in a way that the world embraces. She makes Mendes’ deliberately little picture work. So does Micheal Ward, who is persuasive as Stephen, a young Black man with hopes that should be pursued—college and marriage. The contrast between the two is immensely affecting, with Stephen on the rise and Hilary barely able to maintain her life.

The characters in Empire of Light are likely what Mendes dreams for a new Britain, populated by people like Stephen and supported by an older generation who could resemble the damaged but liberal Hilary. Sadly, that hasn’t happened yet. The film he’s made is a compassionate look at Britain in distress in the ‘80s. Are things better now? Or will they be in the new future?

Joanna Hogg’s elegant new film The Eternal Daughter comes advertised as a ghost story and a gothic romance, and, happily, that’s what it delivers. Set in an old-fashioned Welsh country estate turned into a hotel, it begins in classic fashion, with two ladies, arriving by taxi one foggy evening, being warned by the cabbie that he once saw a ghost in a window in the ancient building. The two women are an upper-crust British mother, Rosalind, and her middle-aged bohemian filmmaker daughter, Julie. Both are played by the incomparable Tilda Swinton, which is no surprise considering that she’s Julie Hogg’s oldest friend and has appeared in her previous films, The Souvenir Parts One and Two as Rosalind, the mother of the aspiring filmmaker. In a way, The Eternal Daughter completes Hogg’s “memory” trilogy.

Julie has embarked on a sentimental journey with her mother, back to the family’s past when Rosalind was sheltered by a maiden aunt in the same estate during the Second World War. Julie has plans to make a film about her mother, so she takes the opportunity to record her voice reminiscing about the heavily appointed historic rooms in the mansion. Rosalind’s memories are a mixture of happy and tragic episodes, all of which she recounts in a dispassionate manner. As she expresses to Julie, the events have occurred decades ago, and she’s accepted all of them. Far more emotional than her mother, Julie weeps several times and continually blames herself for anything that has gone wrong for Rosalind. Their relationship is fraught with tension as Julie tries to be the most attentive daughter one can imagine while also making a film.

After Rosalind falls asleep each evening, Julie takes the family dog Louis on walks around the formal grounds and the other buildings that form the country estate. The atmosphere on the walks is quite gothic, with odd noises and lights appearing unexpectedly as they walk, though nothing especially untoward takes place except the evening when Louis gets lost—and then found.

The only people working at the hotel are an elderly and very nice Black man, who is the groundskeeper and general handyman, and the rather unhelpful receptionist/waitress, a doleful White working-class Brit, who contributes nothing meaningful to the story.

The Eternal Daughter is a hermetic piece. Critics have compared it to a string quartet but if so, it’s a lesser one, perhaps a piece by Cherubini or an early Dvorak, worthwhile but not a masterpiece. If one were to praise it, the essential drama, and the film’s real success, is in fully developing the typically intense relationship between a mother and daughter. This being a film about a certain style of British gentry, the women mainly express themselves through misdirection; neither really wants to put their cards on the table. At the end of the film, Julie finally does confront her mother with startling results. Perhaps what she’s done is to take on the ghost in the room.

The art direction, cinematography and editing of The Eternal Daughter is impeccable. The atmosphere can’t be faulted nor can the music. This is, apparently, a personal project for Hogg and everything is well thought out and directed. The key to the film is Tilda Swinton, who has brilliantly collaborated with her friend, Hogg, improvising much of the dialogue of the mother and the daughter. What do you call a film like this? A one-hander? At any rate, the collaboration of Hogg and Swinton continues with another film that is easy to endorse. No, it’s not as good as The Souvenir Part One, a genuine masterpiece, but it is well worth seeing.