Film Review: Avatar: The Way of Water & Geographies of Solitude 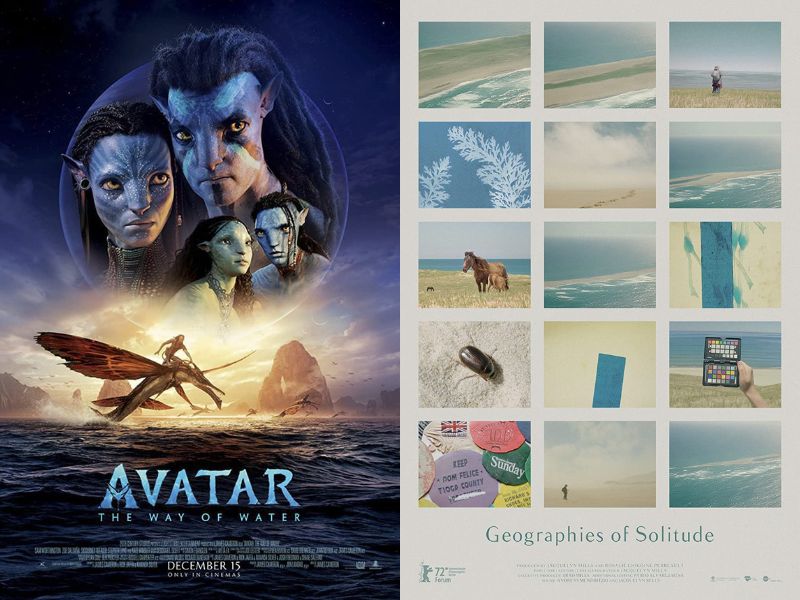 Avatar: The Way of Water & Geographies of Solitude

Avatar: The Way of Water

Avatar: The Way of Water is like the current World Cup. James Cameron’s new film is a multi-billion-dollar investment much like the Cup. Both are about sponsors and investment and corporate profit and less about film and football. That doesn’t mean Cameron doesn’t care about his film or that Messi doesn’t want to win the Cup. Of course, they do. But at some point, you realize that you’re no longer rooting with the boho at the coffee house or the bloke at the pub but with big business suits looking for the highest profit.

James Cameron’s long-awaited sequel to Avatar has been so long in the making that many of us have forgotten exactly what happened 13 years ago in the $3 billion (that’s right, billion) dollar hit. The Sky People—aka humans—invaded the natural world of Pandora in the first film, and the successful fight back was led by Jake Scully, the avatar of a human who had originally come to conquer the planet. But Jake had fallen in love with Neytiri, the daughter of the Na’vi clan chief, and turned against the colonizers who were after the aptly named substance unobtainium. With the whole planet including the animals fighting with them, the Na’vi won and the main fighter for the sky people, Col. Miles Quartich, was killed.

That was then, this is now. In Avatar: The Way of Water, the Sky People are back, just as ruthless as ever, this time intent on taking over Pandora so they can colonize it with humans from an ecologically devastated Earth. Meanwhile, Sully has been busy on Pandora, making and raising babies with Neyriti: two boys (Lo’ak and Neteyam), and a girl (Tuk) plus a mysterious hybrid young woman (Kiri) and a sorta-bro human who refused to leave Pandora named Spider.

When Sully and Neyriti launch a successful guerrilla war campaign against the heavily armed and resourced Sky People, their response is to bring in a new Avatar, a weird super clone of a Na’vi but with the scary Fascist Marine voice (Hoorah!) and memory of Col. Miles Quartich.

Realizing that Quartich and his Avatar crew will find them in their jungle home, Sully takes the surprising step of leaving the jungle altogether to a completely different culture in Pandora, that of the sea-based Metkayina (yes, we’ll have a quiz later!). The leadership of the Metkayina, Tonowari and Ronal, aren’t keen on their cousins arriving but accept them, which ushers in the best section of Cameron’s film.

Adapting to the Metkayina ways isn’t easy for Sully and Neyriti’s family and the most delightful part of the new Avatar shows how they have to learn how to be aquatic—holding their breath so they can swim for extended periods of time and experience the wonders of the water. It is glorious: intensely visual and just dangerous enough to command our attention. This may be Cameron at his best, investing the audience in a vivid appreciation of sea creatures and the vast other worldly environment under the water. (Call it Snorkeling IMAX style).

The most exciting sea creatures are the tulkun, grand animals that resemble whales and have the sensibility of dolphins. The Metkayina are their cherished friends: they sing to each other. In a special scene, one of Sully’s kids, Lo’ak makes friends with a rouge tulkun. You know that will help some time in the future.

All good things must come to an end. Cameron has to give us a plot, which feels a bit wonky. Given that Sully has gone underground, or at least under water, why not leave him alone? But no, the plot dictates that Colonel Quartich must come after him and his family, all guns ablazin’.

As must be expected, battles must take place. How do you make billions without them? Cameron’s film is filled with eye candy, but I suspect that most people want their visual enjoyment to be peppered with explosions and death. Rest assured—that happens.

What is striking and a bit puzzling is that Avatar: The Way of Water isn’t about avatars. With rare exceptions, we don’t see the human forms that have been revived through science into dream-like figures. Sully is almost a mutant as are his children with Neyriti. The film isn’t about transformation. It’s about family and building a fortress with them. Sully says so several times just in case you miss the point. If anything, Cameron’s message is more conservative than ever. Yes, he’s against the Sky People, whose tactics mirror those of the U.S. in foreign wars since Vietnam–destroy the villages, the societies and the culture—and surely they’ll be our “democratic allies.” But what is he for?

No doubt Cameron cares about ecology and it’s clear that he loves the water. But let’s be clear:

Avatar: The Way of Water is about making billions. Just like the Cup. Will it work? This is not the best plotted film you’ll ever see and there are many Indie features and docs with more ideas. But can it entertain audiences? You betcha.

Jacquelyn Mills’ Geographies of Solitude is a visual and aural treat, one that is truly film art. Any viewer will be struck by the look of this exotic film, which is stunning. Lovers of documentaries and photo essays set in unique natural locations will be transfixed by it. But Mills has done more than that: she’s made a film that challenges the viewer philosophically while seducing with extraordinary visions. What is clear from the outset is the director’s unteachable poetic eye—Mills has it and we’re the better for it.

Set on Sable Island, the film profiles both the natural surroundings and its scientist and main resident Zoe Lucas. While Mills clearly has come to admire and respect Lucas, her film is more interested in what transpires on Sable among the seals, birds and horses that make up so much of the life on the island. Her approach mirrors that of Lucas, a documentarian herself and one who doesn’t feel the need to call attention to herself.

Even for Canada, a country of geographic diversity, Sable Island is a unique place. It’s long and thin, more of a sandbar than an island, only 2km wide at its largest over a 40km length. Set in the North Atlantic Ocean, a tough spot to inhabit, it has an extremely variable climate, which shifts from frigid to sweltering over a twelve-month period, with its best days being in July and August.

The rolling hills, sand dunes and verdant plant life are glorious on Sable but what truly marks it as remarkable is their two main animal populations: horses and seals. Mills spends a good deal of time with each, understandably so. Horses are cinematic—tall athletic creatures that gambol and sprint through nature as their natural desires carry them. Mills’ camera captures them in their splendour, wild creative creatures, left alone to be natural—untethered, impulsive, free spirits, running freely in the wild winds of Sable Island.

If horses are nature’s aristocrats, grey seals can be easily consigned to the role of clowns. You might gawk in amusement as they wriggle forward, bellies rolling, from the shore to a sandy bar, where they can hang about, making dorky seal-sounds. Over 100,000 seals have been born and make their home on Sable, likely more. Mills’ wide, poetic lensing catches these Marx Brothers of the sea-loving mammal community in their comic splendour.

Nature may be the main text of Geographies of Solitude, but Mills doesn’t ignore its narrator, Zoe Lucas. Sable Island’s main resident for the past forty years, Lucas has deliberately forsaken a “normal” life to be the scientist and archivist of this extraordinary island. The life of the island is told to us through Lucas’ disembodied voice—we don’t see her—and the poetic eye of Mills. It’s more than enough.

An admirer of Lucas and in her own way, a researcher and technician, Jacquelyn Mills has made an art film that uses natural techniques such as exposing photo-materials to starlight and hand-processing images immersed in seaweed, to degrade and transform the footage shot in order to make a unique documentary. Like Lucas, Mills believes in the scientific method, understanding that what she creates is extraordinary because it is so precise.

Geographies of Solitude won three prizes at the prestigious Berlin Festival and two awards at Hot Docs including Best Canadian Film. It’s gone on to win accolades in Korea, Canada and Italy. This is a special work, a must see, for those of us who love poetic expression in the arts.