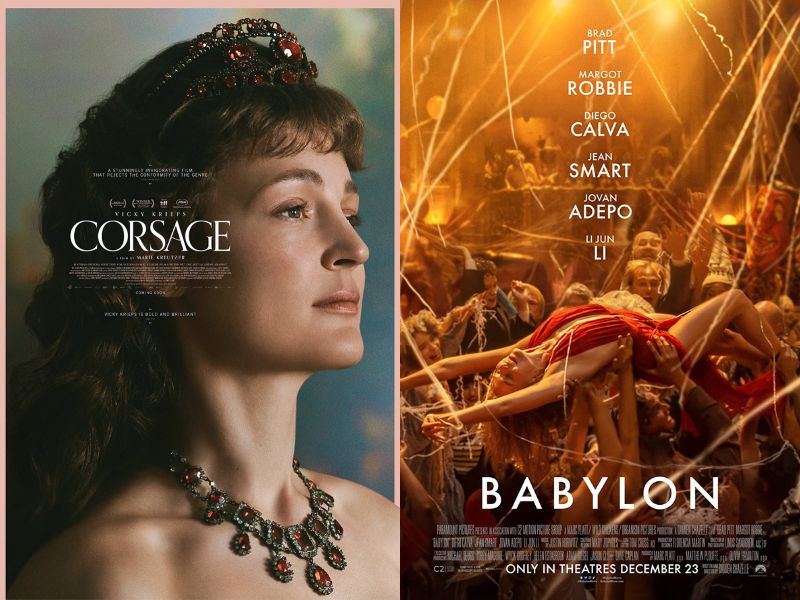 The Empress Elisabeth of Austria and Queen of Hungary, who reigned with her husband Emperor Franz Joseph from 1854 to 1898, was an icon, one of the most consequential women in Europe during the 19th century. Her fame may have diminished since the defeat of the Empire but there has been a recent upsurge in interest in “Sissi,” as she was popularly known, lately, culminating in a Netflix international TV series “The Empress,” and this film, Corsage, which has been winning awards since it premiered at Cannes last May, where Vicky Krieps won a Best Actress prize as Elisabeth. The Empress’s story is the stuff of legends: married at the age of 16 to a very smitten Emperor, the regally beautiful Elizabeth kept a super model figure throughout her life. She was loved and hated by a huge population which encompassed Poles and Czechs in the West, Austria in the centre and Hungary, Rumania and Serbia to the east.

Born into a distinguished Bavarian aristocratic family, and Empress as a teenager, Elisabeth was willful, charismatic, intelligent and socially gifted. Though she had to jockey for a favourable position in the Habsburg empire, battling with Franz Joseph’s mother the Archduchess Sophie for power and attention, she eventually got the upper hand when she gave birth to a son, Rudolf. Her love of Hungary and perhaps scandalously, the country’s first prime minister Gyula Andrasssy, ended Austria’s military dictatorship of the area and created a dual regal system that successfully lasted for nearly 50 years.

Director and writer Marie Kreutzer has worked brilliantly with the acclaimed actress Vicki Krieps to create an Elisabeth who is intensely human while retaining all of the flaws of a blinkered aristocrat. We see her riding horseback in England, speaking perfect English while flirting with her instructor in a pre-Lady Chatterley’s Lover sequence. Sissi is shown attempting to seduce her husband Franz Joseph, who is so angry at her presumed infidelities that he refuses to sleep with her. At another point, she makes one of her entourage pretend to be her (with a mask) during a ceremony. She’s 40 and concerned that she’s losing her sexual dominance in court and with her husband.

Krieps is wonderful in Corsage, as she is in everything I have viewed with her in it. I love the integrity of her performances and the way she has of thinking through her characters to arrive at the core of their entities. Film posters for Corsage show the attractive but withdrawn Elisabeth/ Kriepsflipping her finger at the audience. The overriding emotions in the film are anger and ennui. Empress Elisabeth wants adulation but is profoundly dissatisfied with her life. She’s caught in a trap but can’t get out. She has lots of privileges but can’t move away from her life and role in it.

The pacing in Corsage is slow, perhaps deliberately so. We’re invited to contemplate an empire and a period, which was despised throughout most of the 20th century. Now we can see that that Austro-Hungarian Empire may not have been a terrible entity and could be looked on now as multi-ethnic society that sorta worked. The figure of Empress Elisabeth is more relevant than it has seemed in a very long time.

Auteur director/scripter Kreutzer has worked with Krieps to make a fine if somewhat distanced look at the Empress. In doing so, she’s made changes in the actual events that took place during Elisabeth’s reign. Still, the overall feeling of the royal court during the latter stages of the Empire is beautifully evoked. Most importantly, Vicky Krieps keeps us on focusing on Elisabeth, a tragic figure, whose life was regal but too full of obligations and expectations to ever be fulfilled.

Corsage may be slow and caught too much in the past. But it’s a beautifully made film that should be seen especially for Vicky Krieps’s wonderful performance.

Damien Chazelle’s account of Hollywood’s Roaring Twenties—the one a century ago—has the emotional coherence of a child who finds out for the first time what his parents did for him to be born. If they could have done that, anything is possible. And nothing really makes sense.

Chazelle begins Babylon with an elephant defecating at a film party and has a set piece where an alligator nearly attacks a would-be producer. In between there’s drugs, sex and hot hot jazz. Chazelle has heard the stories of Clara Bow entertaining the UCLA football team and Fatty Arbuckle’s salacious party and Michael Curtiz’s unsparing use of extras in battle scenes and, well, lots of other bad things. He assumes that nearly every film set during the Silent Era was an incoherent mess ready to be taken over by drunk sexy starlets and tough studio execs who could override their useless directors. He doesn’t seem to have heard of Allan Dwan, John Ford, Joseph von Sternberg, Henry King, F.W. Murnau and many others who made film art during those days on sets that were tightly run, with schedules that were adhered to, on movie after movie.

Babylon lists drunkenly from parties to crazy film sets to premieres of big successes. No one seems to have slept or tries really hard to act or direct. Anyone who knows anything about the great films that were made in the Twenties will be in despair watching this movie, supposedly made by someone who has studied the era. I challenge Chazelle: what does he know besides the scandals?

His story, such as it is, concerns the rise of Nellie LaRoy, a naturally talented performer—and sexy, to boot—who comes on set an extra and leaves a star; the continual success of Hollywood he-man Jack Conrad (Brad Pitt), a cynical likeable icon, and the stunning rise to the top of Manny Torres, a Mexican idealist, who goes from an assistant to a producer in the twinkle of an eye. All of them—LaRoy, Conrad and Torres—are undone by the talkies, which destroys the crazy improvisatory movies that Babylon supposedly celebrates in the beginning of the film.

It should be pointed out that Margot Robbie as LaRoy and Brad Pitt as Conrad are terrific. They’re more than joined in praise by Diego Calva, who is superb as Manny Torres. Worthy of mention are Li Jun Li as an equivalent of the one Asian female star of the time, Anna May Wong, and Jovan Adepo, a Chazelle fantasy figure of a Black actor and musician who walks away from Hollywood due to racism.

In Babylon’s one genuinely accurate and mesmerizing scene, LaRoy tries to act out a scene under the harshly restrictive conditions of early talkies with the primitive sound equipment dictating everything in a sequence of multiple takes. If Chazelle had restricted himself to scenes as coolly put together as that one, he would have made a masterpiece. Instead, he’s made a melodramatic mess.

The last act of this self-indulgently long (189 interminable minutes—over three hours) movie shows how LaRoy, Conrad and Torres get their comeuppance in the early ‘30s. It’s followed by a long coda in which Torres watches Singin’ in the Rain and reflects on the beautiful past of cinema.

Here’s my recommendation. Forget Babylon. Watch Singin’ in the Rain again. They don’t make them like that anymore. More’s the pity.